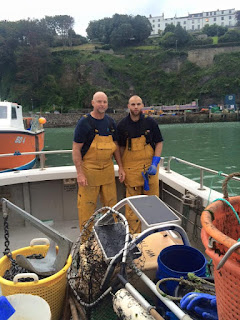 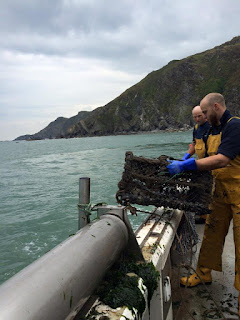 My son Jack is often called upon to assist his girlfriend's brother Ben, with pot hauling duties and as I happened to be visiting him in Ilfracombe at the time, jumped at the chance to get on board and see how its done.
Ben, at a mere 19 years of age , must be one of the youngest commercial skippers in the country but judging by his display of skill and experience when handling his boat and gear, you'd be hard pushed to notice.
As 'green horn' I was given the job of baiting the pots whilst Jack hauled, cleared the catch, and meticulously stacked the pots ready for the 'shoot'.
We retrieved and reset nine lines each comprising twelve pots in the space of a few hours. The target was Lobster and a modest catch worth about £200 was amassed for a considerable amount of hard work.
Due to bad weather the pots had lay in 'soak' for several days and, as well as crabs and the odd wrasse,some were  occupied by angry congers which had become trapped inside but made a hasty escape once the 'door' was opened.
A fascinating insight for me into the world of the commercial fisherman and an eye opener too. Never let it be said that this is an easy way to make a living. 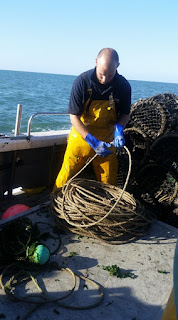 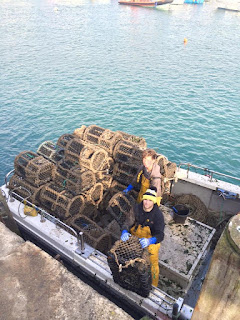