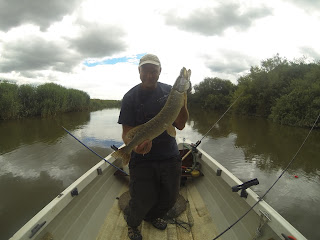 A controversial subject indeed.
Traditionally, the 'unofficial' pike fishing season runs from October 1st to the end of the river coarse fishing season-March 14th.
Fishing for summer pike is debated endlessly on forums and in piking literature and has indeed been a contentious issue for many years. I recently read an article on the subject in an issue of 'Angling' magazine from the early 1970s in which the author-Martin Gay, a very prominent contemporary pike angler, was promoting summer piking. The proceeding issues had many letters on the subject both for an against the practice. The celebrated pike angler Mick Brown was an exponent of the sport, devoting whole chapters to it  in his book 'The Practice and Passion' from 1993.
Nowadays it still something of a sensitive matter with angling clubs often ruling no pike fishing in the summer months.
This situation is apparently ,unique to the United Kingdom as in other countries, particularly mainland Europe, pike fishing is a year round sport.
Pike , despite their fearsome appearance, are actually comparatively delicate creatures and need to be handled correctly in order to facilitate a successful return whatever the time of year. The problem with summer piking is that , with higher water temperatures there could be a lack of dissolved oxygen in the water. The pike certainly fight harder in the summer months because they are generally more active so there is a perceived risk that they could tire themselves to an extreme level.
Personally, I take a great deal of care with pike that I catch and have never failed to successfully return, nor ever had to leave hooks in a fish. I've also never had a pike go 'belly up', always ensuring that they are kept out of water for the shortest possible time and carefully 'nursed' back into their environment. Usually this involves supporting the fish in the water and not letting go until it 'strongly' swims away.
I was lucky because, early in my pike fishing 'career' an experienced pike angler showed me the correct way to handle and unhook a fish and I strongly recommend any tyro pike angler to seek advice and a practical demonstration from an accomplished piker before going it alone even in the colder months.
Unless the weather is extremely warm and water levels low, reduced summer oxygen levels should not be a problem in moving water, particularly one as fast flowing as my local river. Also, because I'm fishing from a boat, a controlled return is always possible as its so easy to support the fish , in the water at the side of the hull.
During the traditional pike 'season' our river is often completely unfishable due to flooding which can sometimes render it out of action for several days, if not weeks at a time. It only takes a day or two of persistent rainfall for the river level to rise considerably, and adopt the colour of tea.
With recent climate trends this situation has become something of a regular occurrence which is exasperating in the extreme for the keen river predator angler.
I'm only a very 'occasional' still water coarse angler so, hunting pike in pits, lakes and reservoirs doesn't really 'float my boat' -I know, because I've tried it.
Whilst I'm certainly not advocating summer piking for everyone, especially those lacking in experience, it is for the above stated reasons that I've decided, this year, to have a go for them personally but, only on the river, and only from the boat.
Today was my first attempt albeit a brief one, and I did experience some success, catching a rather nice upper single figure pike on my first cast, and experiencing a dropped take later in the session from what was , I suspect a small fish.
Scant results you might say but, believe me, pike from our local river are difficult enough to catch at any time of year so I was not disappointed.
Method of choice was a live roach on a float paternoster rig which gives excellent , instant bite detection. Trace was a single, treble hook affair.
Prey fish are certainly easier to catch in the summer anyway and as I'm a huge fan of bait fishing, especially with a float, it was a no brainer.
Why not lure fish? I hear you say. Well, whilst its probably a sound method to adopt in warmer weather on most waters for pike, seeing as they are so active, personally I've yet to experience much success using it locally. But perhaps I haven't given it enough of a chance.....yet.
For the time being there is something rather magical about watching a pike float........especially when it suddenly isn't there any more..
Posted by Unknown at 06:57