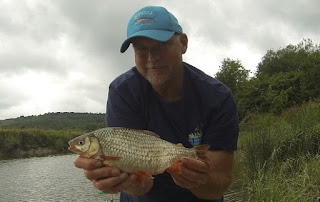 1lb 4oz Arun roach
...but somehow, a roach of over a pound seems like quite a big fish. Well lets just say its an above average fish  by my modest standards.
.I have caught a larger roach, an accidental capture whilst mullet fishing way down on the tidal stretch where , by all accounts, they had no right to be but, in all honesty, I have very little provenance with the specie to speak of.
As a youngster in the mid 70s I remember my fishing buddy catching a one pound roach from the Thames at Kingston-a regular haunt of ours at the time. It seemed huge and I recall being quite envious of this 'specimen' especially when most of our catch comprised tiny ruffe and gudgeon.
I can't remember the last time I saw a ruffe, also known a 'pope'. Do they still exist?
I returned to the scene of our pre-baiting campaign for today's fishing. Our (mine and Dave's) last visit was almost entirely unproductive probably because we mostly fished with large pellet baits in the hope of a 'carbel'. However, throughout these sessions we were continually harassed by small fish nibbling at our baits, and I suspected they  weren't all 'tiddlers'.
I'd even declared to my mate my intention to try for a pound roach (achievable ) and a twelve ounce dace (not quite so easy but we'll see)
Scaling the tackle and bait right down to a single red maggot on a size 18 hook coupled to a feeder rig once the swim had been built up with a few casts to get the fish 'going', it was a 'bite a chuck' though not always easy bites to hit.
I had to fish my way through the smaller roach and dace but occasionally the culprits would turn out to be decent roach in the half to three quarter pound bracket topped off by the above specimen at a pound and a quarter. I also managed to catch a common bream of a couple of pounds and a rather feisty eel which subsequently destroyed my end rig.
So, have I been bitten by the roach fishing bug? Well actually yes, and I've been consulting with Brian, formerly a successful match angler on the river, for some tips on how to improve my catch rate.
Perhaps one day a two pound Arun roach will grace my net although this may take some time.
One of this size was recently reported by a Pulborough Angling Club member. It took him  forty years to catch it!