Yet again , something REALLY special comes along just when you least expect it.
There was a window in the weather today. At least, that's what it said on my most trusted wind forecasting site and, as they rarely get it wrong, and the tides were favourable(very small)  I decided it was time, once again, to target the blonde rays on my favourite sand bank.
My good mate and marina neighbour Brian had expressed an interest in catching these BIG rays , so it was him I called upon to crew for the trip and he didn't need much persuading.
With 1to 4kts wind forecast, we were both quite surprised just how bumpy the sea was, and the ride down to the mark was a slow plod keeping the speed down to about 10-kts to avoid losing any teeth. Sorry Bri, no offence mate.
It was rough out there.
Bites were slow materialising but Brian eventually had a blonde on of about 20lb but, experiencing some extreme difficulties wielding the landing net whilst being thrown all over the 'shop', we proceeded to lose the fish when the trace chafed through. I was devastated as this fish would have easily beaten Brian's former P.B of 16 lb but my crew was far more philosophical about the event and quickly dropped his bait back down.
A small thornback ray followed to my bait but with bites a bit slow, I suggested a move to a different part of the bank in order to search out the fish. If the sea conditions had been better, we'd probably have moved sooner but sometimes its easier, and certainly more comfortable to sit things out.
With the tide slacking I repositioned the boat on a shallower section of the bank and, this proved to be a wise decision as it wasn't long before Brian's whole squid was taken again.
Despite switching to a heavier rod, this Ray rally 'battled' and when she surfaced I could tell that it was a special fish and would not fit in my 24 inch landing net. Instead, on Brian's suggestion, I wing gaffed the fish and this proved to be a much more efficient method of boating the fish and , despite perceived wisdom, actually did very little harm at all.
When on board 'Jupiter' the true size of the ray could be gauged...and this was one very big blonde. Once we'd  struggled to get her in the pike sling she whizzed the 'Avons' round to the red sector settling on 39lb , corrected to 37lb 8oz once the  sling had been subtracted. WHAT a fish. As I found out later just 2lb 2oz short of the British record for the specie.
A few fumbled snaps were taken before she was slid back into the sea, perhaps to reappear one day at a record weight.If she does, and its one of us that has the privilege of capturing her, she'd still be returned. On that we both agreed.
With the winds freshening and  on losing our anchorage I took the decision to 'call it' early and head inshore to calmer waters where we experienced similar anchoring issues before finally retiring, and returning to port. We'd had our day and what a day. Well done Brian for bringing such a superb fish on board 'Jupiter' and one that will certainly take some beating. 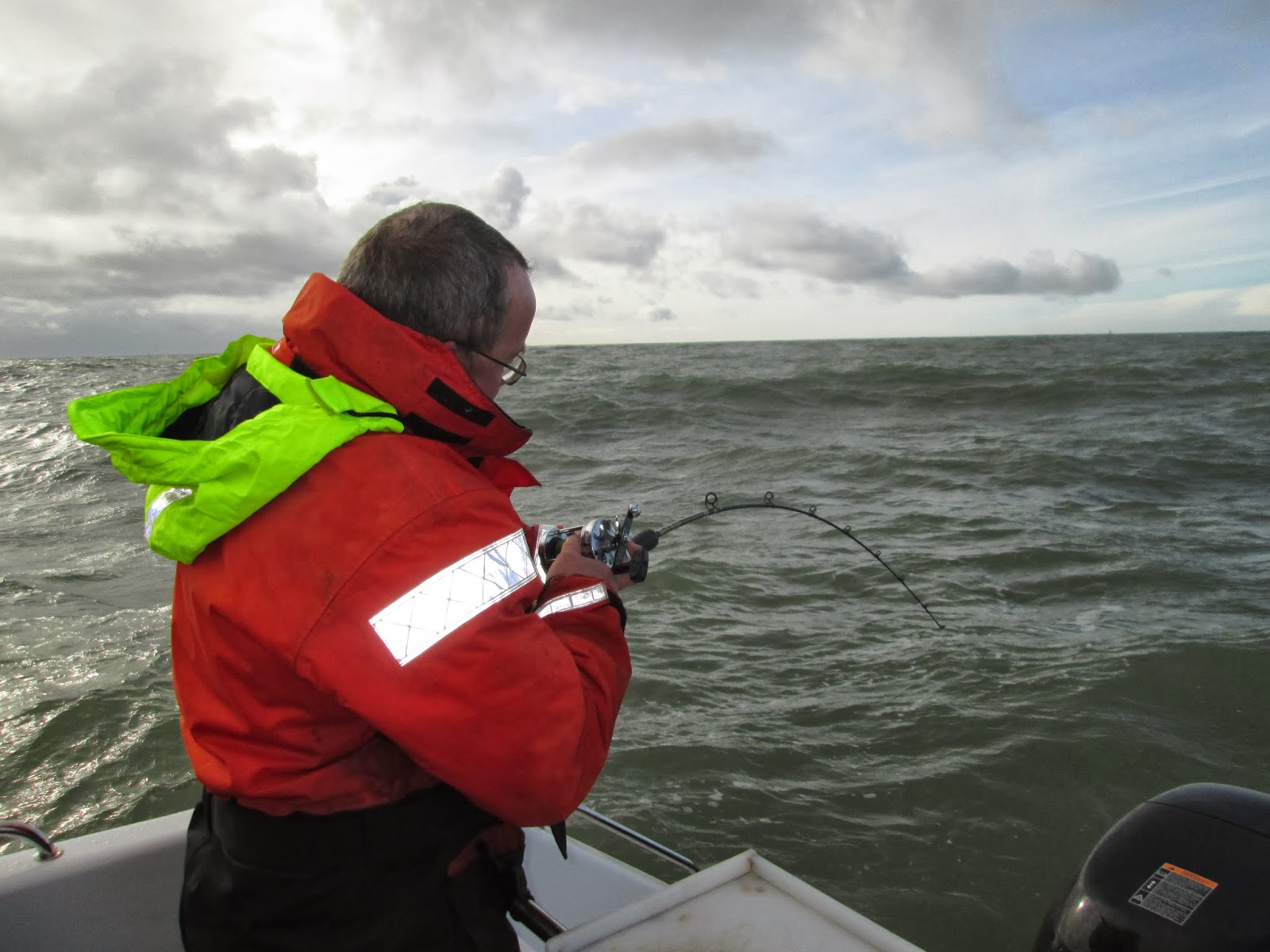 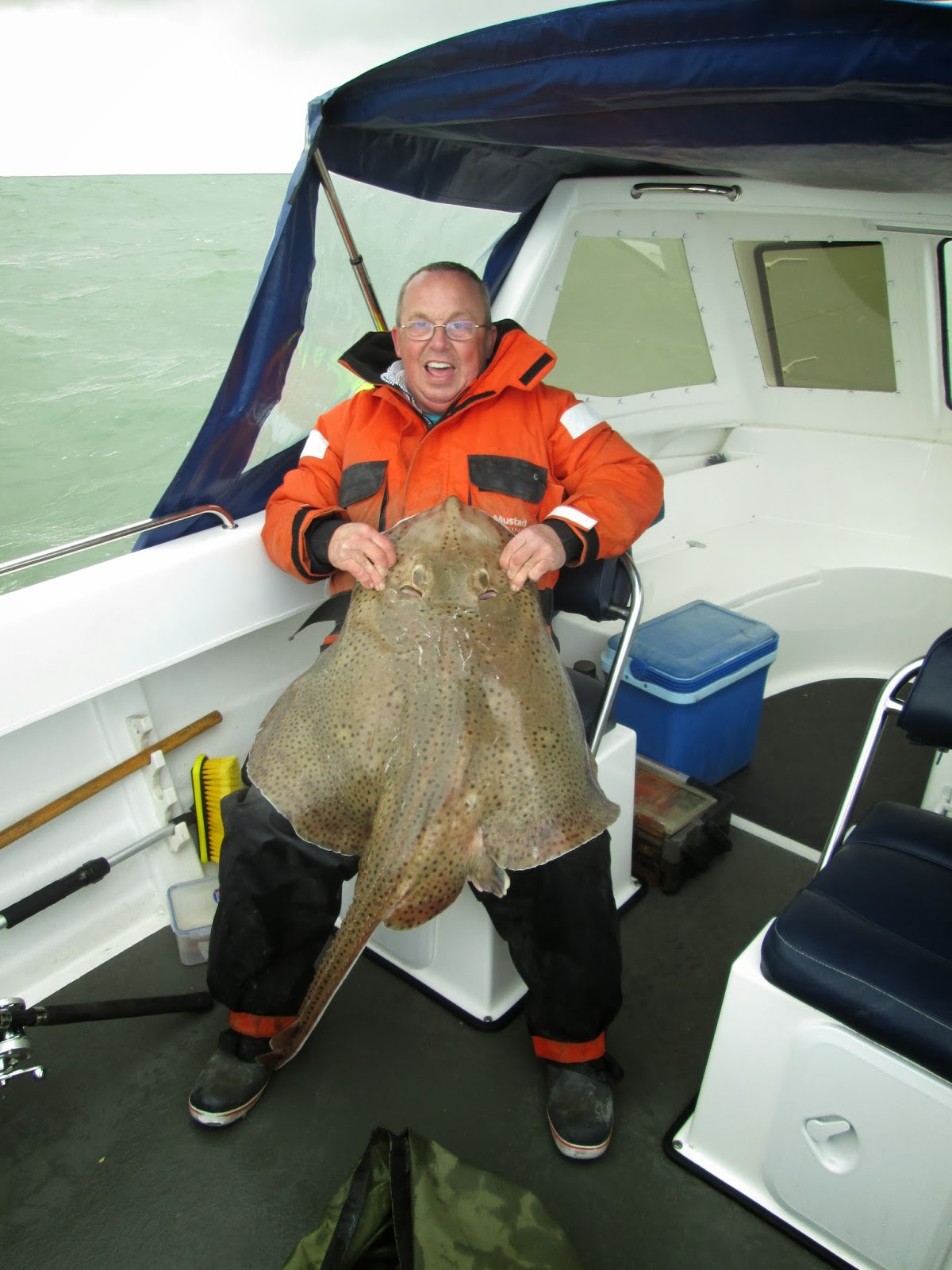 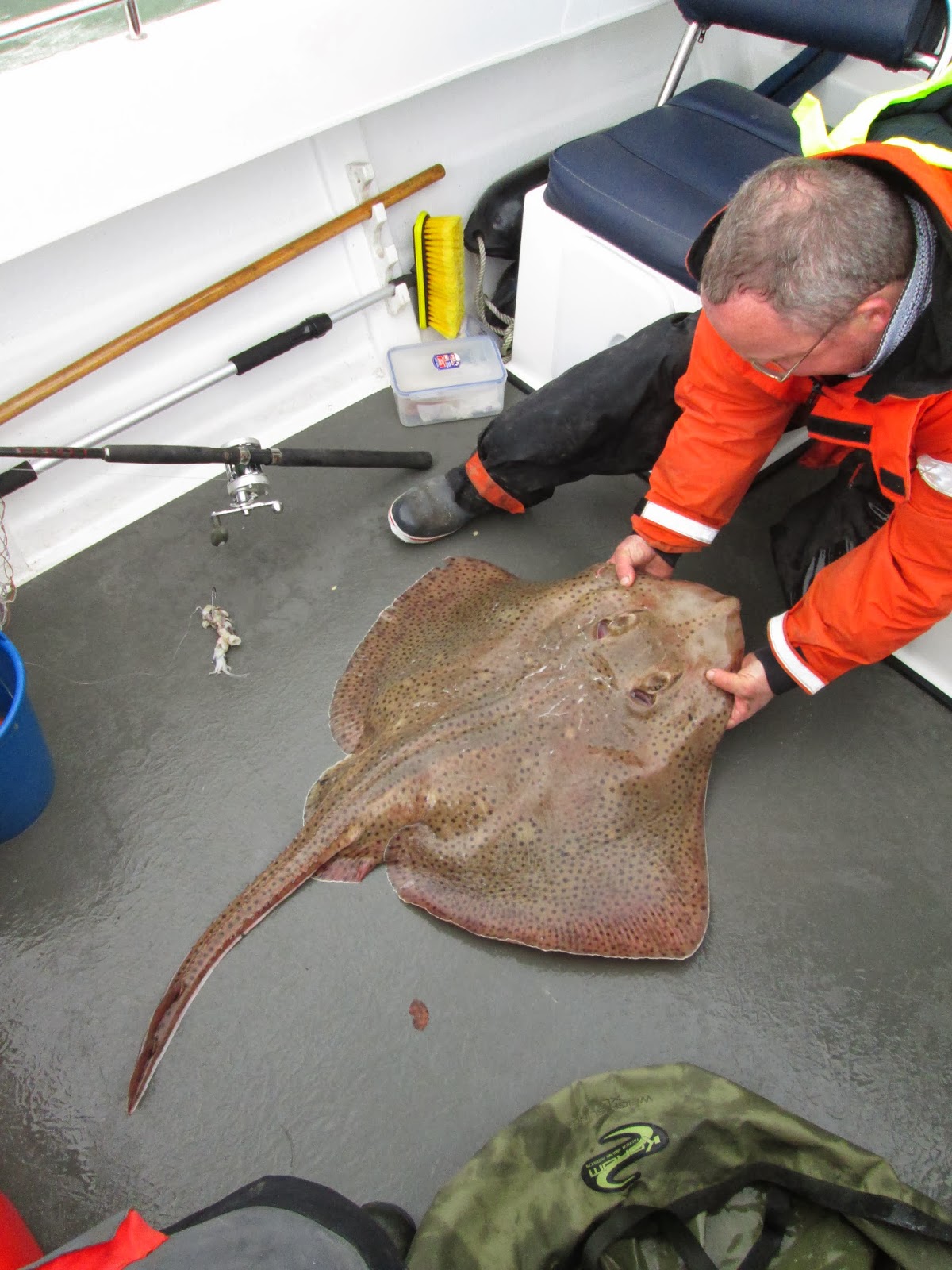 The big question is; How long do these Blonde Rays stay around.? I did well targeting them at this
time last year but, I have relatively little experience and knowledge of the specie and  have been given mixed opinions on this question.
If anyone can throw any light on the matter,leave a comment on here or email me at  completeangler@sky.com
Posted by Unknown at 12:05