Not, it must be said, a very productive month's fishing at all which is why I'm condensing reports of these trips into one entry.
Firstly, a  short run out in the boat in search of a cod and , concentrating on BIG baits, I managed to land just two dogfish. However, all was not wasted because, one of our local charter skippers was very close by and doing  very well with conger-a species I'd like to turn some time to in the future.
Thanks Dick for sharing all the necessary information. I'll be back on this one.

Following on from that I had another visit to the lake in search of pike and blanked. Well, that's not strictly true as I did catch a rather nice roach of close to a pound on a pole rig baited with maggot intending to trap live bait for the session. Unfortunately, the roach was just too nice to use, and I set it free. The only other action was two perch that were probably too tiny to even attract a bigger fellow of their own specie. 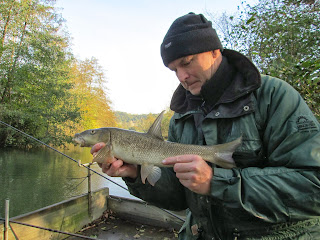 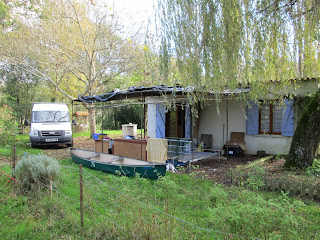 Later in the month I travelled to central France with my mate Dave Nevatt to visit a place he's recently bought down there with , both a river running through it(Charente), and a pond. Dave's caught barbel, bream and carp there this year so it all sounded idyllic, and indeed was but..............with me in attendance....the fish just did not want to play ball. I fished super hard for four days for two bites,the smallest barbel I've ever seen................and a bream , which Dave landed himself.
It was good to be able to help my mate out with some work on his new 'project' and I suspect it will be well worth a revisit in warmer temperatures as it's a beautiful spot.

To well and truly put the icing on the cake, while i'd been away, the U.K weather had been kind and some of my mates had been 'avin' it away big time with some superb catches of bass and a few cod-well done Clive.

Back home again and I desperately needed some decent fish action so, with strong winds confining the boat to it's mooring, it was time for another trip up to the river but, with a change of specie in mind.
I like chub fishing with bread. It's clean, simple and interesting and the 'new' stretch of river that I'm exploring this season has got 'heritage' when it comes to good old 'chevin'.Travelling light I selected a narrow 'streamy' stretch with lots of interesting, 'tight' 'chubby' looking swims to drop my liquidised loaded feeder into.
First cast-bang a chub, not big but a good start and a reminder of what it felt like to have a fish on the end of my line. In short, I tried four different swims  for three chub- none of them big , up to two and a half pounds but, terrific fun and again, something I shall return to again soon.
Back in the game again. 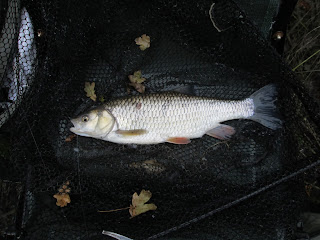 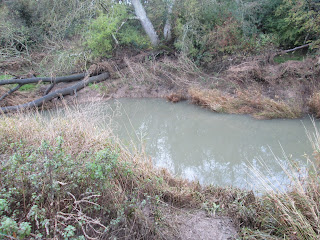 My good mate Mick (Pinchers)Pinchbeck recently sent me some pics of fish he's been catching out in his own boat and I couldn't resist sticking this one on the blog.A truly excellent specimen spurdog-not that common a specie around our way and something i'd love to latch on to one day myself. Well done Mick. 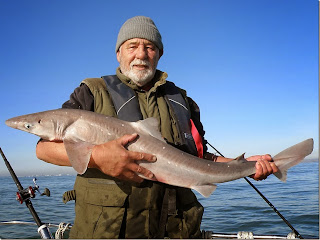