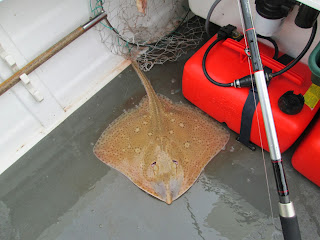 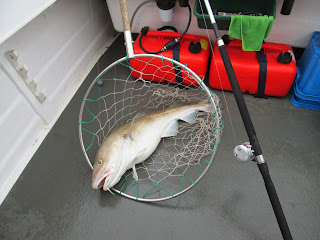 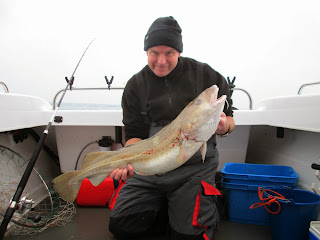 I had two choices for this trip. I'd been tipped off that some good bass were about but that the shoals were tight and could be tricky to locate(vertical fishing with lures??) OR, I could follow my own instinct and have another go for blonde rays on one of the big sand banks 'out west'.
I chose to pursue the latter but couldn't resist  a quick 'scan' of a very shallow reef en route to the mark. Nothing showed and, as I felt  like having a nice 'lazy' day at anchor anyway, rather than the hard work of drifting with plastic, I dropped the pick and settled down comfortably on the 'numbers'.
Small tides and bass don't really compute in my world but, it's only when the tides are relatively small that its possible to anchor up and fish these shallow sand banks. I'd done well in January with blondes but, something that someone with far more experience than myself had mentioned to me had firmly stuck in my mind;
'There's always the chance of a stray bass or cod turning up'
How right that man was. The bites were slow in materialising with just a couple of cat shark(read; dogfish) nibbling at my whole squid baits during the prolonged slack period that is characteristic of such small tides but, once the flood started pushing properly, something better came along in the shape of the target specie- a blonde ray.
Not a 'biggun' but it confirmed at least, that I was in the right place. It was quickly followed by a nice spotted ray but that turned out to be the final showing of the 'squashed sharks'.
A violent take followed and with a head banging fight giving the game away immediately, I knew I had something pelagic on the other end. Up came a bass of between six and seven pounds which was cleanly released at the side of the boat (lol it slipped the hook).
As the tide really 'filled in' another wrench on the rod tip had me thinking a second bass was on the way up however, this one didn't stop fighting after a few 'head bangs' and I was pleased as punch to see the appearance of a decent sized cod hit the surface and successfully slide into my waiting net. This one wasn't going back. A new p.b cod at 17-08 which tasted absolutely spectacular dipped in beer batter for the following day's tea.
Somehow, chip shop cod will never be the same again. Let's have some more of that!