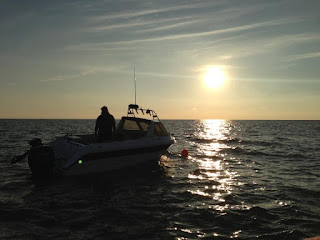 My second run out in the boat and another attempt to tease a cod out of our generally, cod free waters. I joined mates Brian and Allan in the general area of the mud hole, not wishing to venture out too far, and succeeded in catching probably every dogfish and whiting in the sea.
Brian did latch on to a small cod but,it was the same story pretty much everywhere.Even 'Spirit' failed to latch on to a 'greenback' although some neighbours on the 'fishtail' did pick up one or two big cod. It would seem i may need to venture further afield next time.
Posted by Unknown at 13:43