In late September I visited the Sothampton boat show with the sole intention of getting a test run in a Warrior 175.Choosing which boat to go for had not been easy with so many variations, and differing opinions to consider.Also, taking the plunge buying brand new, with all the obvious financial considerations was a huge step.I was impressed with the test, and took some time on our annual holiday to France to think things over.
With the decision made, back in England in mid October I took my motor bike for a spin up the M6 to the Warrior factory at Leyland in Lancashire,and finalisied the specification.
A few days ago I received the call that the boat was ready, and a date to collect was fixed.
In the meantime,I'd sold my Orkney through WSF-the deal actually taking place only days after I'd visited Warrior's.The new owner bought it on spec and, as he lived in the North East, we arranged to meet when I collected my new boat.
So it was finally time to say goodbye to my trusty Orkney 520 Scooby 2.My son,  Jack joined me for the delivery drive to meet the new owner Andrew at the Warrior factory , and to collect my new boat-a 175 Export  model which I've named 'Jupiter's Moon'.
Bit of an epic journey really, with a total mileage of 540. Seeing the new boat for the first time inside the factory was breathtaking to say the least. She looked stunning............and huge.
Scooby's new owner seemed very pleased with his new acquisition, which was satisfying, as i'd spent quite a bit of time in the preceding days getting her ready. Despite the appalling weather conditions (severe flooding nationwide)the return run home proved uneventful and the boat, considering  it's size, towed easily. This may prove to be useful in the future as i intend to do a bit of travelling with her. Safely on the drive at home, she looks monsterously big and i need to get a couple of coats of teflon polish on her before she's moved to the mooring...... 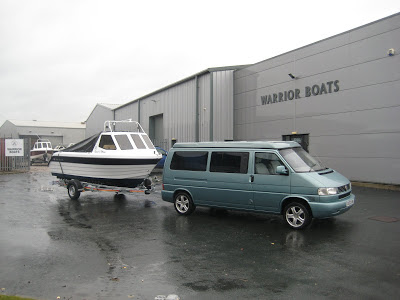 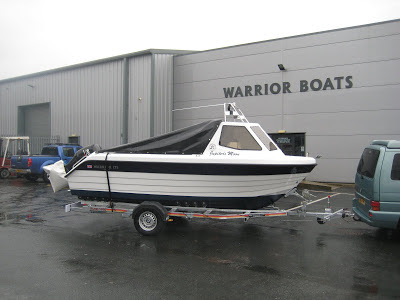