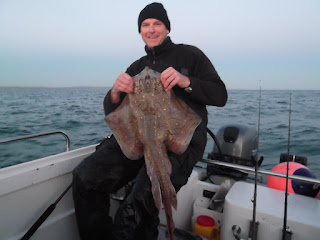 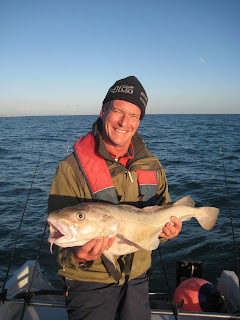 Alas not for me, but for my crew.
Rusty's boat is not too well at the moment and out of the water for repairs, so i offered him a trip out in Scooby in search of those elusive cod-the like of which , excepting  small ones, have not yet graced Scooby's deck.
The areas around marks 28, 23 and north of  2 were chosen mostly for their heritage with 'green backs' and, on dropping the baits, I quickly became 'king of the rays' with a spotted, and two thornbacks to my cuttle strips . Russ meanwhile, entertained himself with doggies.The fishing was slow, especially over the slack, but the weather, and banter made for a pleasent day whilst we patiently waited for something special to arrive.
23 eventually proved to be the killer mark, and i was chuffed to bits to land Scooby's first ever decent cod for Russ-a tidy fish of 12 1/2lb on a half cuttle .
Shortly afterwards a call on the mobile from Alan saw us up anchor, and head south in 'rescue mode' to assist my mate Ted, whos battery was completely flat leaving his Orkney 520 'dead in the water'.  Having a dual battery system on Scooby, my second battery was pressed into service and 'Wicken Lady' soon burst into life with skipper and crew looking suitably relieved, and journeying home to safety.A valuable lesson learned there.
Meanwhile Russ and me returned to 23 only for Russ to pick up a second slightly bigger cod, and for me to retain my ray 'crown' with a nice double figure undulate before there was enough water over the bar to get back to port.
Returning home in darkness we both agreed that it had been a splendid day's fishing and i was particularly pleased with, not only the cod, but Russ' compliments about my boat-despite the fact that it must have felt very small compared to his own craft.
5.5m tide.
Posted by Unknown at 13:35