Mark runs a small boat angling club in Bognor and he'd invited me out on his own craft this evening to show me the ropes of lure fishing for bass on the inshore reefs situated just off this stretch of coastline.The reef is, in fact, the beginning of the huge system that stretches out to sea in a south easterly direction culminating in the famous Kingmere rocks.
Mark's boat is a classic 'Regis'.A 16ft open design commonly seen locally and put to use both in the commercial and leisure fishing sectors. The boat is kept in a beach side pound, and hand launched over the shingle, using a trolley and rubber mats to prevent the wheels bogging down, and employing an electric or diesel winch for recovery.With three of us on board , and to assist with the handling of the boat, the whole operation was carried out successfully with no major issues, though thankfully, the sea was relatively calm.
We mostly fished the inner reef with surface and shallow diving plugs but the bass weren't really having it.Both Skipper Mark and me had some follows-mine of a 'Skitterpop' which I've still yet to catch a bass on.(This year maybe)But the only hook ups were three small pollack to my Husky Jerk and a mackerel to the third crew member-another Mark.
The trip however, was thoroughly enjoyable and an insight into what's on offer over that way, as well as being a bit of an introduction for me to some lure techniques, and lures that I've not experienced before.
Thanks must go to Skipper Mark for the invite and I suspect that Scooby 2 will be paying some regular visits to this area in the future trying to unlock some of its secrets. 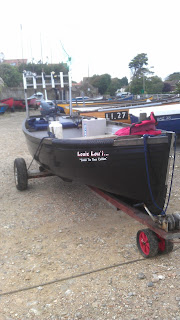