A couple of days ago  Andy and me had a first crack at the mullet in the river but with little success. Although I'd seen good numbers of fish about during a mid day 'recce', the fish just weren't there come the late afternoon/evening period and apart from one small bass to Andy's bread bait, nothing more showed up.

Today . i took the boat over to marks 5 and 6 starting at 0900 off just inside the elbow at 5 and off the main reef. Tidy little mark this-probably mixed ground and donated to the collection by Neil, who I'd seen the previous afternoon in Tropicana-Thanks again mate.
First drop down produced a really nice double figure smoothound-my first of the year.Terrific fight as always and a real pleasure to get reacquainted with these fantastic little sharks.The tide soon slowed but not before another first for the year appeared in the shape of another double, but this time an undulate.
At slack tide, I decided to make an attempt to  fill the live bait tank but had to work really hard for just half a dozen, or so, mackerel. As the tide ebbed, one of these fellahs was sent down under the big float rig and virtually the entire reef was drifted (weaving amongst the other boats in residence) without a sniff from a bass.
Alex, on the other hand, who was anchored up and fishing his usual mackie fillets, had managed to nab a couple so i elected to follow suit and drop the pin about half way between the two marks.
The bass never did show but, a run of rays both thornback and undulate to 14lb, another good hound and some nuisance tiddler bream kept the fishing interesting in the cracking weather.
I decided to call it a day at 3-30 in order to make the bar, but several others, Alex and Pinch among them,stayed out in the sunshine and fished on into what turned out to be a beautiful evening. 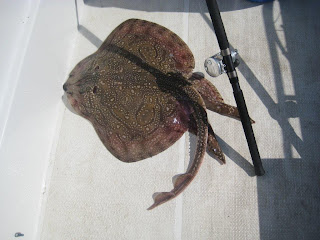