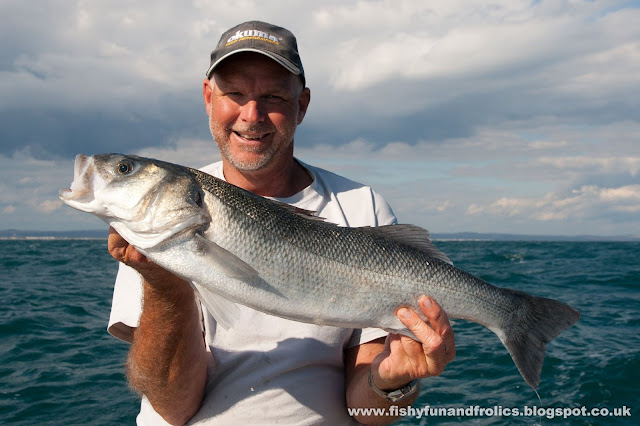 I tend to prefer the bigger tides for bass fishing but , the wind speeds of late have meant that I cannot afford to be too fussy and opportunities to go afloat must be seized, or missed.
Sam Wadman had expressed an interest to come out for a day in the boat this week end and a window presented itself on the Sunday morning. The tide was, at 5.2 m not particularly spectacular but I wanted to get my mate a few nice bass so we took the chance.
The chosen mark fishes well on the ebb tide so our arrival was timed carefully with the high water slack and the mackerel feathers were sent down. They did their job very well indeed, and we soon amassed a plentiful supply of bait, both in the box, and the live tank.
The drift line was selected on past results and both of us fished a float fished live bait alongside vertically fished lures.
Sam had brought along some home made 'bucktails' which immediately caught my attention and has since resulted in me constructing some of my own (more of which in a later entry) but most of the takes came from the usual variety of shads, including 'Fiiish' minnows, Manns etc
We took nine bass from the mark in total , some of a good size (bottom pic) but curiously, the live mackerel were left well alone.
Usually, a 'livie' will far out fish something artificial but this was not the case today, and quite why is something of a mystery, unless these bass were pre-occupied with other prey. There have been large shoals of baitfish about in the sea recently, often indicated by frantic surface activity, and I suspect that the bass, along with other predatory species are taking full advantage of the situation.
As the tide lost its strength, the bites virtually dried up and although I continued to scan the mark  , we were unable to locate any more fish.
A trip to a  bank , a few miles distant ,in an attempt to snag a turbot over a couple of long drifts proved fruitless so, as the sea breeze was by now building steadily, I opted to return again to a favourite reef mark , where bait fishing had proved so successful earlier this month. Probably because of the challenging conditions, we had the place to ourselves, which I always find preferable as it can be a popular mark with our local boats.
Mackerel on this mark were non-existent and, as we had none left wriggling in the tank, we opted to fish half baits instead.
Thankfully the wind was blowing with the tide and although it had reached well into upper double figures , we remained reasonably comfortable and were able to fish at anchor quite comfortably.
A bite off from, what I assume, was a conger (common on this mark)prompted me to upgrade my hook length to 150lb and this didn't seem to put off at least one decent bass.
The take was indeed quite 'electric', which is often the case when using big half baits at this time of year, and resulted in a fine fish coming to the net.
By now, the quite violent rocking of the boat made accurate weighing very difficult indeed but the flickering needle on the scales didn't quite show a 'double' so I'll settle for the fish being a 'nine pounder'. Good enough for me.
That was the last fish of the session  and ,In truth, I was actually quite disappointed that I was unable to show Sam more fish but my crew seemed suitably impressed with the day so that's all that really matters. 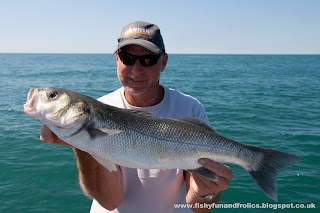