I've now owned my Warrior 175 Export 'Jupiter's Moon' for 21 months and during that time have completed 84 trips in her and, according to the trip meter on my GPS, I have travelled over 1800 nautical miles !!!
I estimate the fuel usage to be something around a litre per nautical mile but easily achieve less than this (better) when i'm able to run quickly on a flat sea. There can't be many vehicles that use less fuel the faster you travel!
One useful little device that is included with my Suzuki main engine, is that it tells you when it needs a scheduled oil change. Every time you start the engine, the tachometer cleverly indicates how many hours the engine has run and, when a service is due, the oil pressure warning light flashes intermittently and a buzzer sounds.
I've been watching the tacho closely on recent trips as it approached the 200hour mark and on the last trip the warning signals were activated and it was time to drag her out for a service. Amusingly, and because i'd failed to read the operators manual properly, the last time this notification system activated at 100 hours i thought there was something seriously wrong with the engine and stopped it dead whilst at sea. It took a while for the penny to drop and i realised it was just asking for a 'transfusion'.
The 200 hour service requires replacement of the pump impeller as well as the full 'works'.
In order to maintain the warranty on the 'big' Suzuki the service must be carried out by an approved mechanic and this costs big money. I've no complaints about the marine engineer who has serviced this engine so far but, like all marine engineers, he's not cheap at all so I decided to take a calculated risk,bin the warranty and do the servicing myself.
Whilst i don't have any formal mechanical traning, i've always serviced my own road vehicles, have the necessary tools and feel competent enough to do so however, I would never touch someone else's boat nor recommend that anyone does it themselves unless they have a modicum of 'know how'. Outboard motors are very simple machines indeed and my Suzuki is no different to most-it's basically a four cylinder,twin cam 2 litre car engine which sits vertically and is attached directly to rudimentary 'gearbox'(the outboard leg)
According to the schedule in the handbook, the service includes a series of inspections and the changing of, spark plugs, engine oil and filter, gearbox oil and impeller. I used genuine Suzuki, or OEM specified parts throughout and despite being extremely cautious and thorough, the whole service took me about three hours in total and probably saved me about £300 in costs. 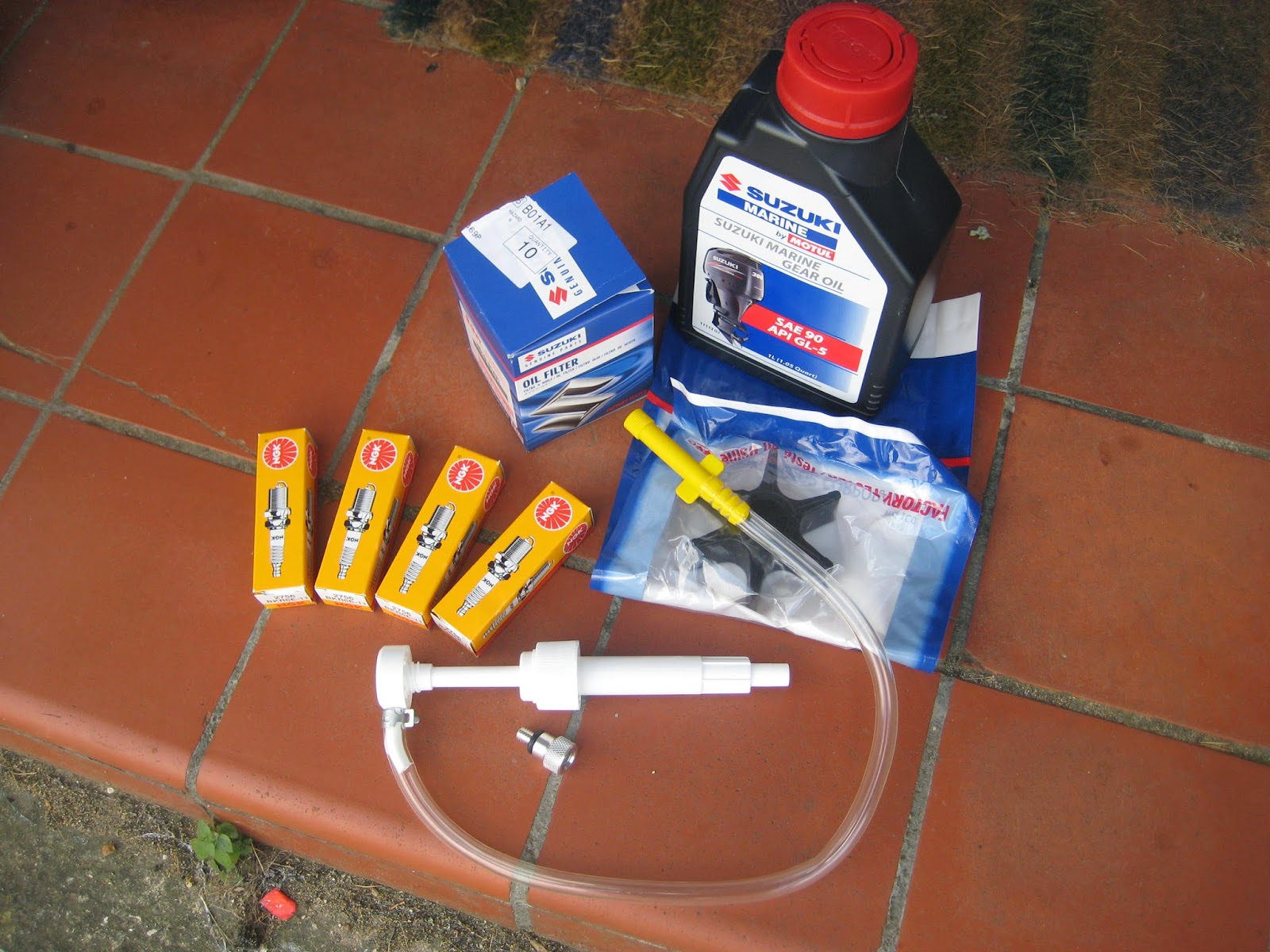 There were absolutely no glitches in the process but, its worth passing on a couple of pointers here to those wishing have a go themselves.
A basic tool kit including socket set will suffice but you'll need a filter strap wrench and a 6mm allan socket for the oil drain plug. 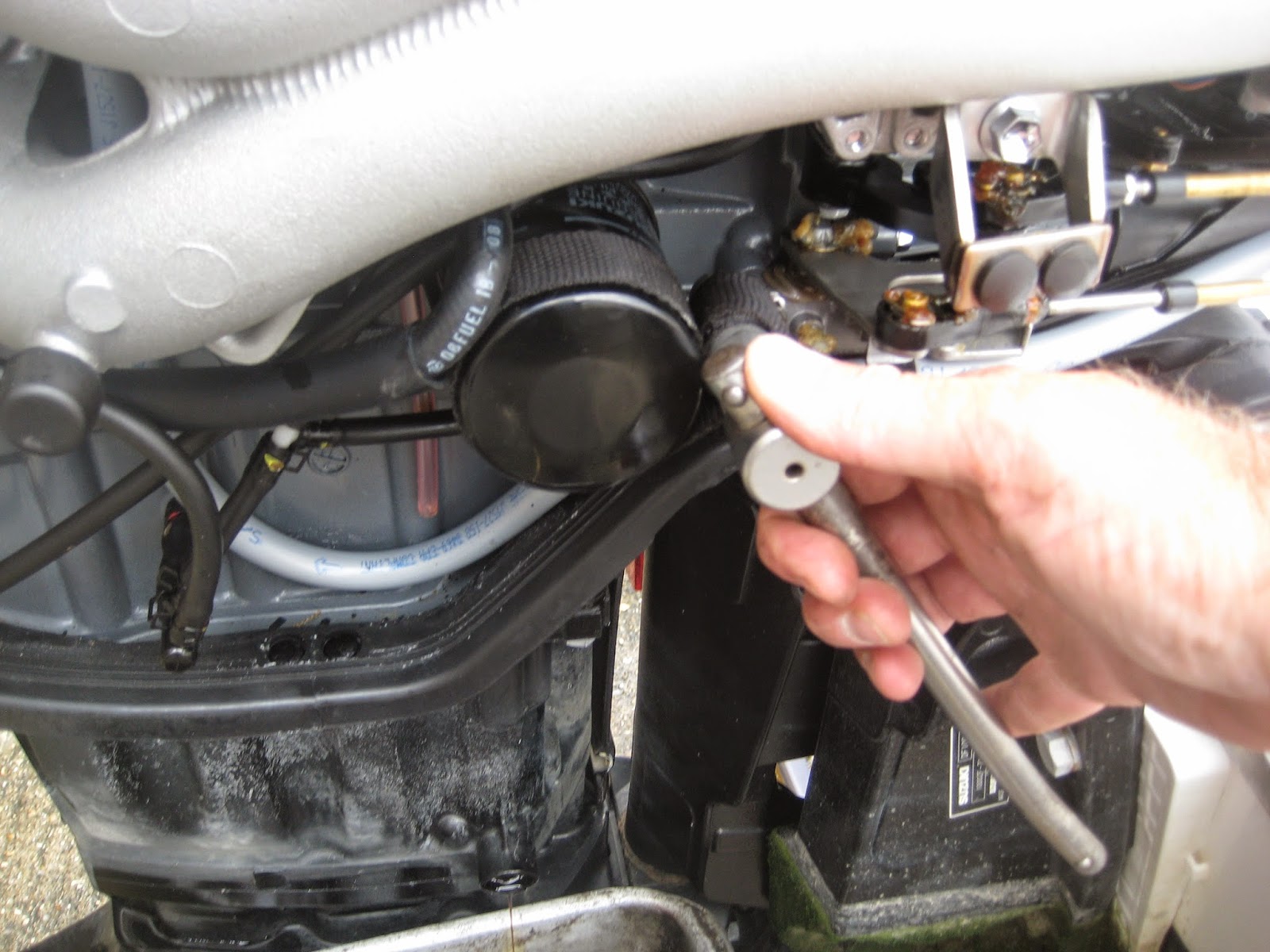 Warm the engine thoroughly before draining the oil (ears and hose line attached of course). 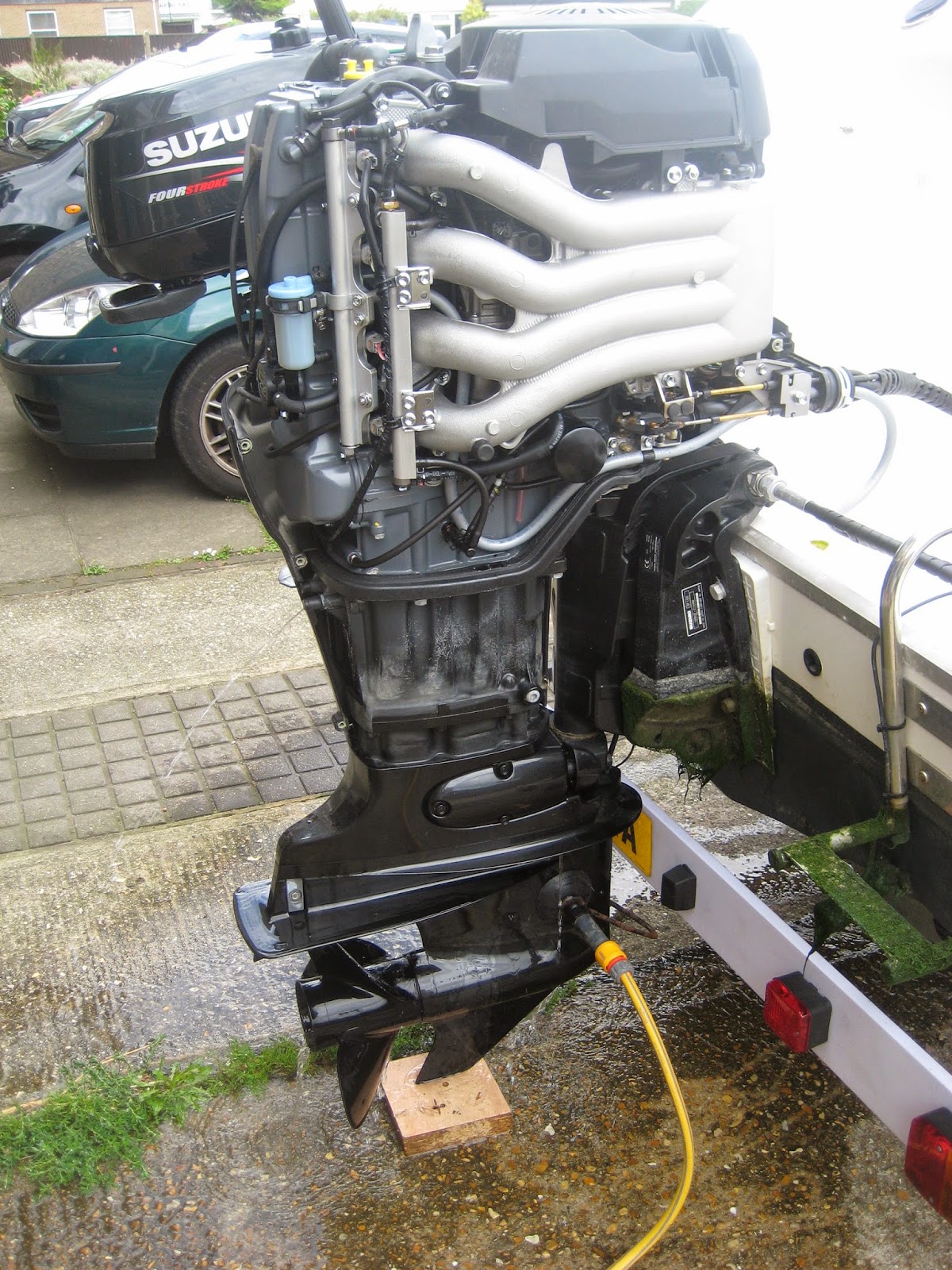 This thins the oil and ensures all the dirty stuff gets drained out. You can see how black it is in the picture.
Make sure you have a big enough drain tray for the engine oil-there are 5.5 litres of it in the 100 hp Suzuki. 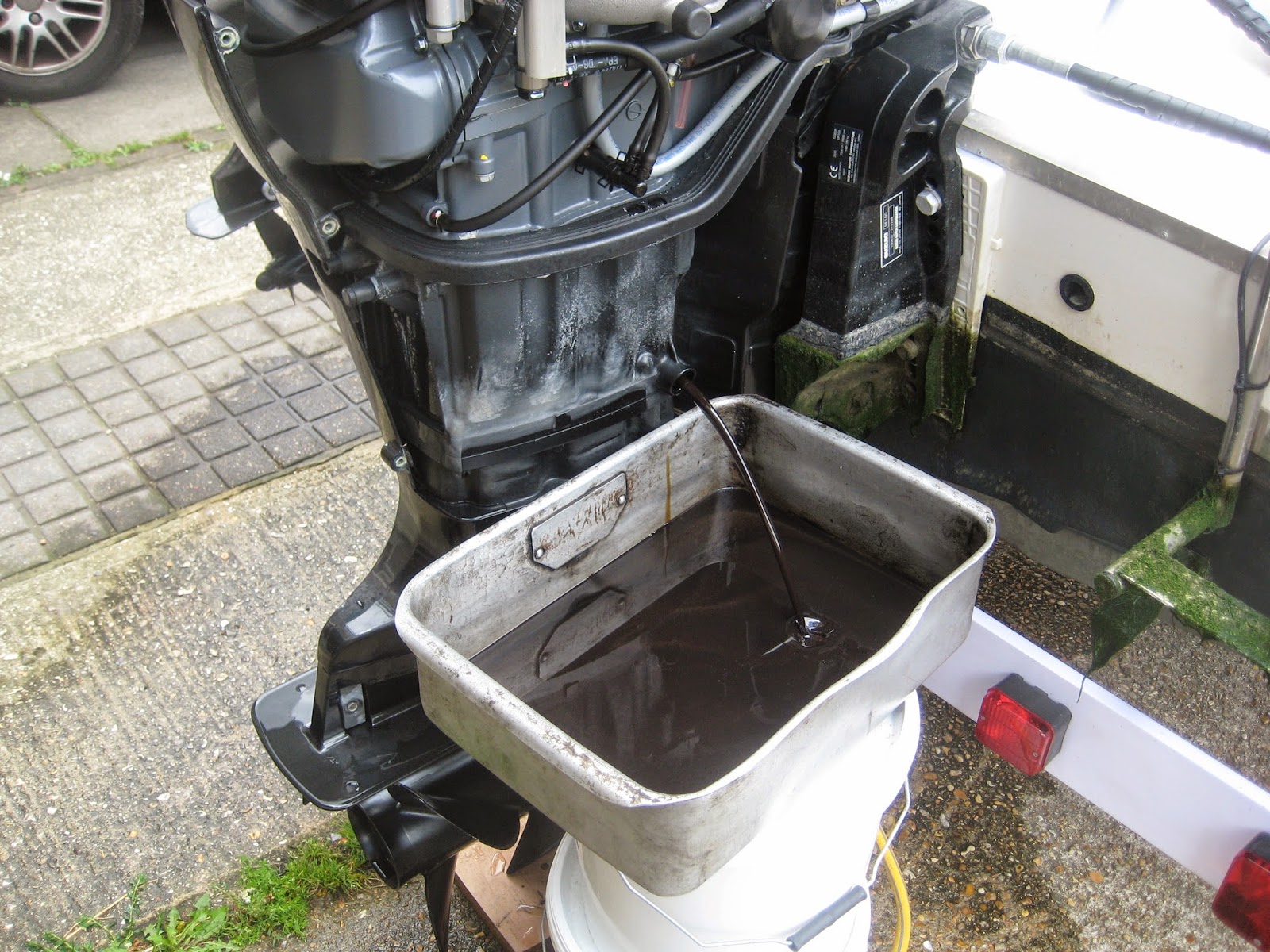 There are six bolts holding the leg in place and one of them is accessed by removing the trim tab. Mark the trim tab's position before dismantling otherwise when you put it all back together ,your boat will go around in circles!! 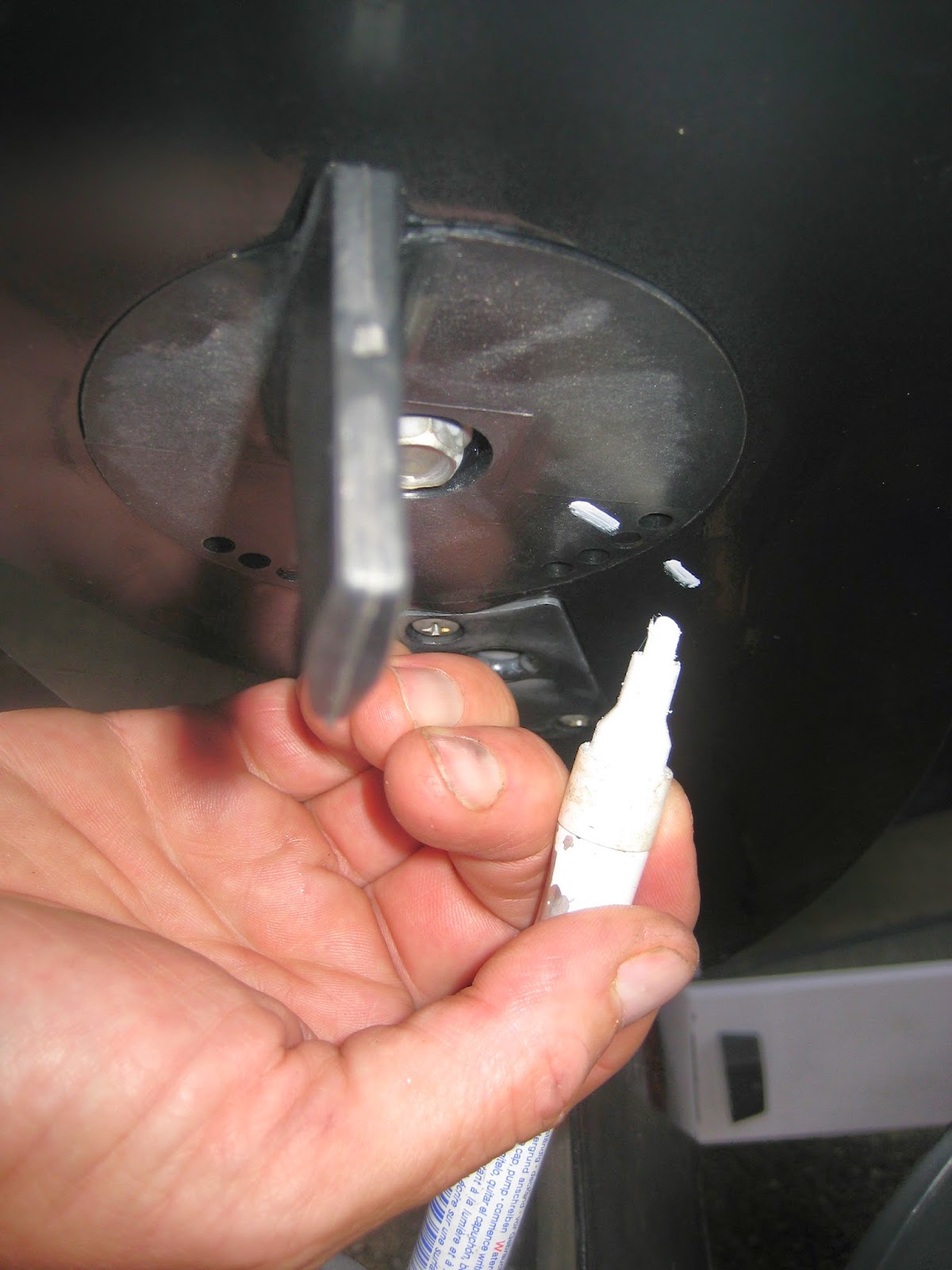 The leg is heavy and unwieldy so be careful when removing it and place it on something protective(i used a sheet of plywood) and don't forget to disconnect and reconnect on assembly the speed indicator tube. 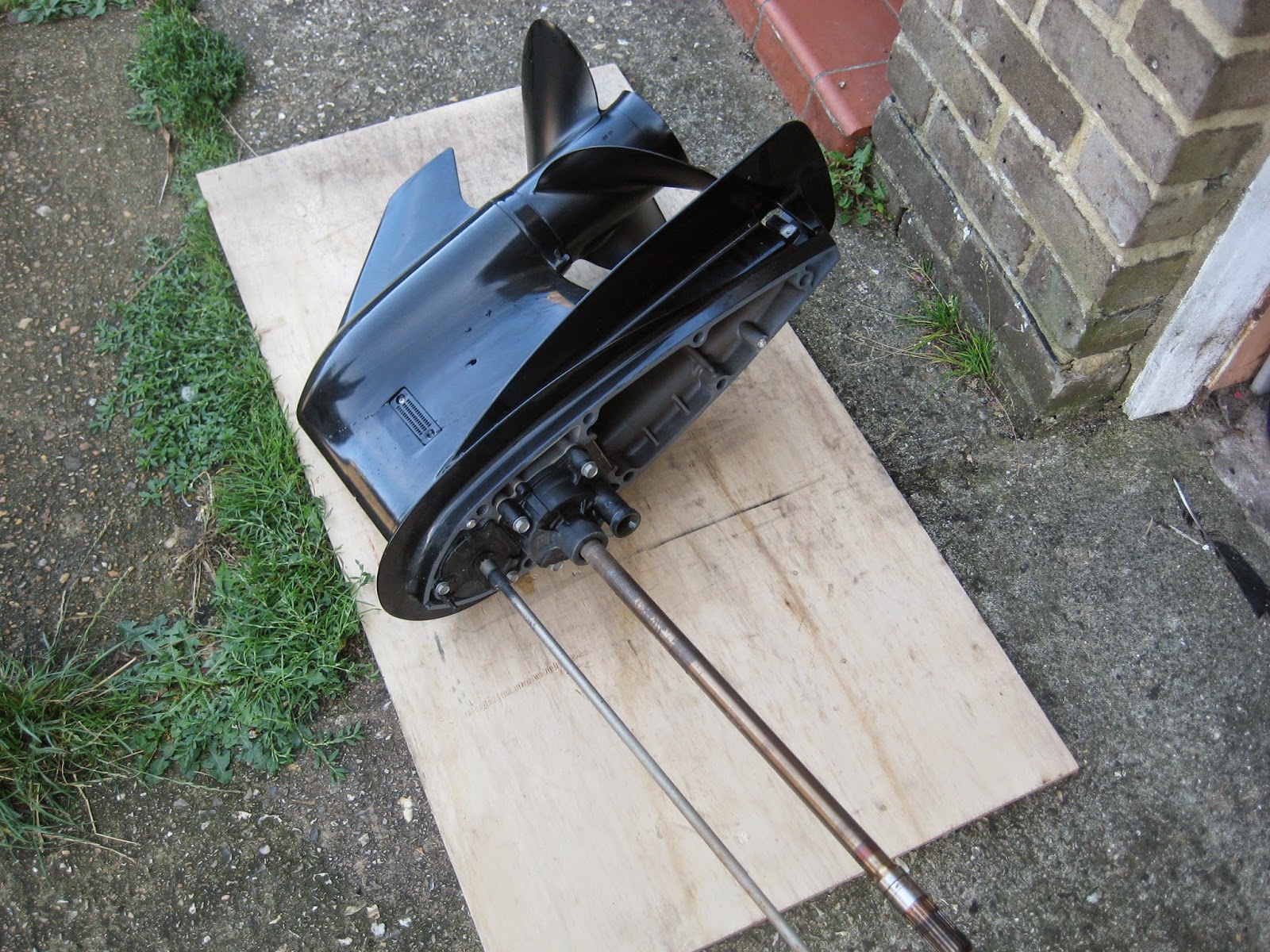 The impeller housing has four bolts and its worth checking the internal faces for wear and replacing if necessary. Mine were still like new even though i don't regularly flush with fresh water however, i do run my engine periodically even if its not being used due to bad weather and always run it in 'clear' water if  I've come in from a trip when the marina is shallow, or its being dredged. The key is to flush out any sediment that might settle in the cooling system .
Get a replacement gasket for the pump housing as it's very delicate and could be damaged when dismantling.
When reassembling the impeller and housing apply a thin coat of marine grease to the components and gently rotate the drive shaft in the correct direction to aid assembly. It also worth greasing the drive shaft, and gear shifter splines. 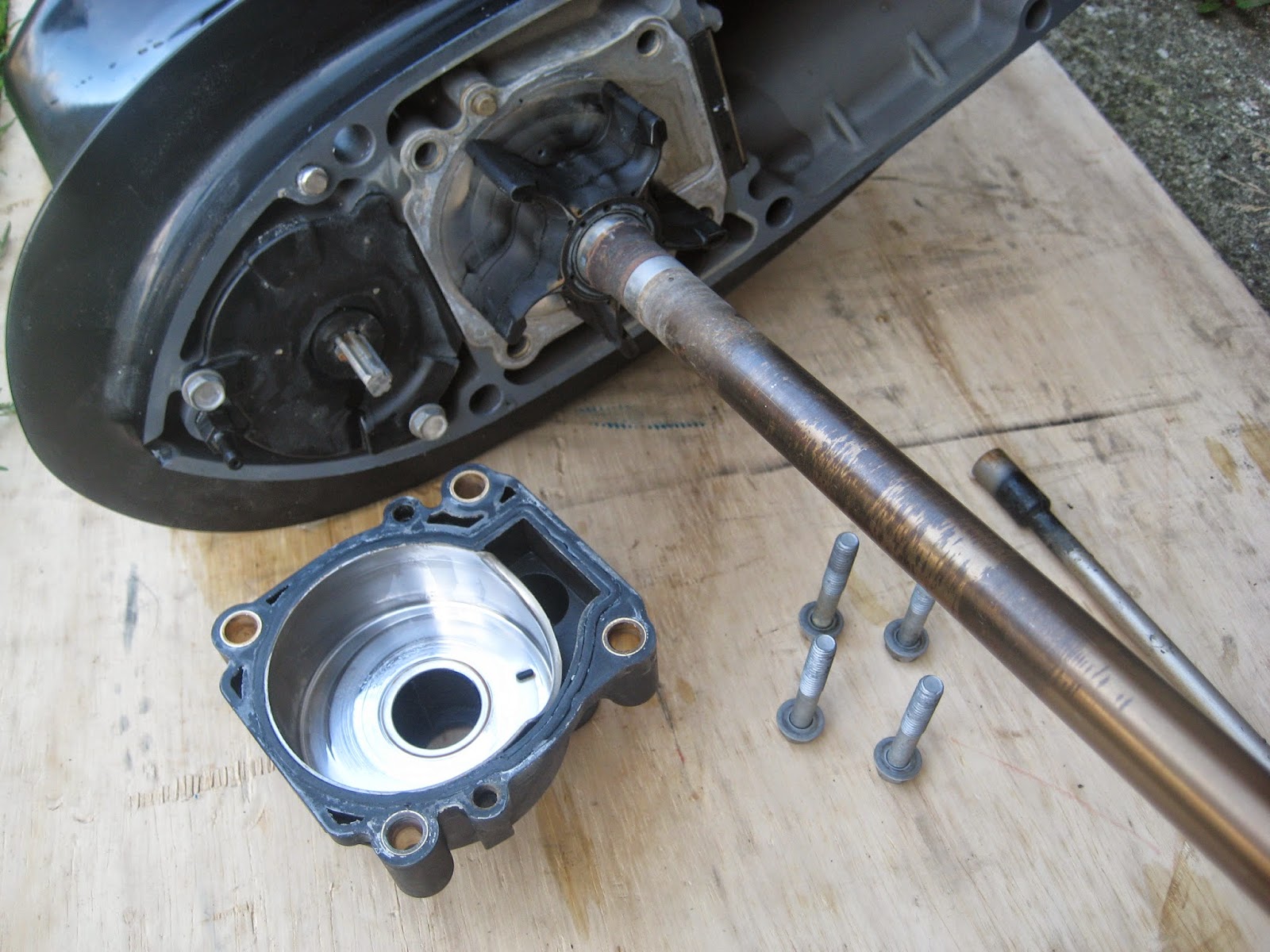 Get a bespoke hand pump and adaptor to fill up the gearbox oil. They are very cheap , worth their weight in gold and usually come in a kit with a litre of EP 90 and an impeller.
Make sure you get the right impeller by quoting the engine serial number when ordering. I got sent the wrong one initially. Doh. 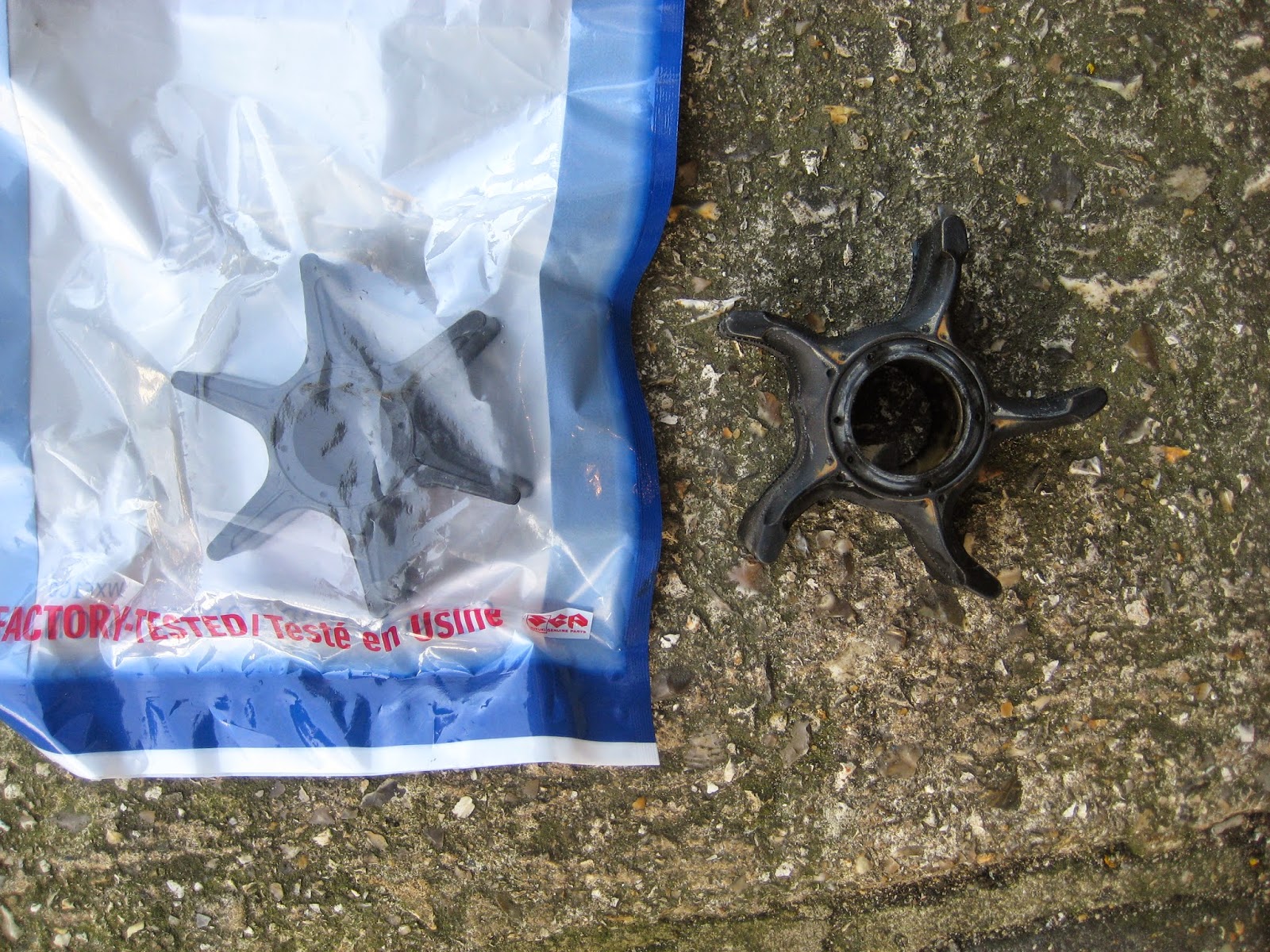 Get an extra litre of EP 90 gear oil in case you spill any and, rather inconveniently, the leg takes 1.1 litres anyway.
Keep your 'old' spark plugs as spares (mine were still like new).
The only job i didn't do was to check the valve clearances as I neglected to order a spare gasket and didn't want to risk relying on the old one to reseal. This job will be done when she next comes out for a shark run which should be in a month's time.
Overall the process was pretty straightforward and enabled me to get a good look at my engine and see what everything does and how it should function.
One issue I did manage to address was the route of the fuel line inside the engine cowling which caused me so many problems just over a year ago. In a nutshell, the fuel line is routed too close to the gear selector cable bracket and is prone to being worn away with use. It had actually worn through a year ago causing a fuel leak, and was replaced with a heavier duty line at the time.
On inspection during this service, the pipe was starting to wear again, so I decided to dismantle the whole fuel /electric/cable input point (I don't know what else to call it but, its where all the cable leads etc enter the engine casing) and see if I could rearrange things.
I now believe that the cables, pipe, leads etc were incorrectly routed at initial assembly resulting in the fuel line being in the wrong place. This has now been remedied and should cause no problems in the future. Whether the responsibilty lies with Suzuki or Warrior I'll never really know but my marine mechanic failed to notice it although to be fair, the fault is not immediately apparent.
Whilst the boat was out of the water I also gave the baby Suzuki 6hp 'wing motor' the 'once over' checking the plug, levels and all the grease points etc and running her up to working temperature. Although its had very little use I'll probably change the oils next time the boat is out of the water and drop the leg off to get a look at the water pump .
One thing I ALWAYS do with the 'six' , is flush it with fresh water every time I run her up as she is prone to clogging up with salt deposits if left.
Regular use of any mechanical device keeps it in good working order and this is very relevent to outboard engines especially considering the environment they work in.
I've also now made up another complete fuel line so I can connect the 'six' directly to the main fuel tanks and not rely on the small built in tank. This will mean that she's always running on fresh fuel and it'll be useful having a  back up fuel line in case something on the main fails.
Finally the boat was given a thorough scrub up and the hull bottom polished once again(I can do topside on the pontoons) just to keep her pretty, before dropping her back on to her mooring.
The whole process took about a day at a leisurely pace and was hassle free-certainly a whole lot easier than servicing a car as everything is easily accessible and there is much less to do, and I suspect that  the experience I've now gained might be very useful in the future.
If you've any comments or questions feel free to respond on this site or email me at completeangler
Posted by Unknown at 08:16