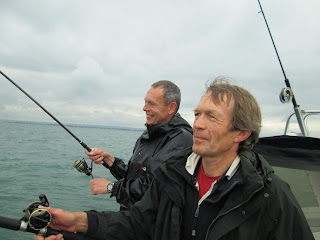 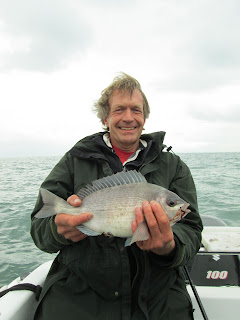 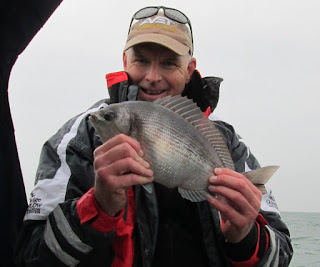 I've been meaning to take Simon and Andy out in 'Jupiter' on a bream run for ages and it would also give me a chance to see how the boat would work with three anglers aboard. Just an afternoon sortie really on marks #7 and #9 and a chance to show these 'beach boys ' what we've got 'out there'.
The first mark proved to be a bit slow despite me hauling a nice bream on the first drop so we relocated and worked some soft plastic over the reef whilst I scanned the sounder. Fish were present, and in numbers, but just weren't interested in the lures......had to be bream I thought and this did indeed prove to be the case.
Once we'd dropped anchor and sent our baits down on an ever increasing tide, a good run of fish turned up with about thirty taken and all of a good size up to 2 1/2lb.
With not another boat in sight it was quite satisfying for me to put this 'new' bream mark on my map and the guys were having a lot of fun in the process despite the weather which, with some penetrating rain, wasn't exactly ideal.
Towards the end of the afternoon I received a text from a mate who had been concentrating on bass with live bait and lure on #6.He'd had a few and asked if we'd like to join him but unfortunately the tide had pretty much done it's thing by the time we'd arrived which was a shame because I would have loved to show these guys a 'spikey' or two.
Although easily achievable,it had been a bit of a 'squeeze' fishing 'three up' to be honest but, at the end of the day,it was a lot of fun and that is what fishing is all about.
Posted by Unknown at 00:51