Jon Cook is a devoted, and expert pike angler who puts a huge amount of effort into his fishing and scores as a result. His tally of big pike is very impressive but, until today, he hadn't managed a river '20'.
Jon has spent a considerable amount of time on my second favourite tidal river this season but for very little return. No one said it would be easy though, on meeting up with him on the bank for this session , i could sense a certain air of despondancy.
I was armed with big trout baits whilst Jon graced his hooks with some outsized bream.We searched a supposed 'hot' area all day without a sniff of a pike and by mid afternoon I was forced to pack up and go to work.
Rather than waste my trout I donated them to Jon's cause, one of which he proceeded to trot under a float downstream in the ebbing, and by now, slowing tide.
I'd just finished packing up when I noticed that finally, my mate was into something, and offered to stay and help with the landing.It was a good job that i did because, although initial impressions were that the short stocky fish, laden with spawn, was a good double, on weighing, she turned out to be just over the magic twenty pound mark.A beautifully coloured pike typical of this river and who's build, again typical, Jon says is apparently due to an initial stocking of reservior fish.
A cracking fish, and well deserved with all the effort that was put in leading to her capture. 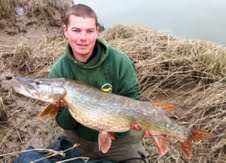 You owe me a quid for that trout mate!
Posted by Unknown at 04:40