The plan today was to head to mark 5 and drift float fished livebaits for bass. On arrival once again, Clive was in attendance and I felt it only right to leave the mark to him and instead fish another section of the reef westwards.Clive's catch on the day was, as usual quite exceptional and once again I just felt as if i was in the wrong place. With a bit more gaul, i would have muscled in.Another local boat did so and scored good bass on lures but that's not really my style.
I feathered up scad, mackerel and pollack on the tail lure but my live baits remained untouched-I will get there in the end.
The disappointing fishing was forgotten however when this pod of about fifteen dolphins were located and remained with us  for about an hour. I'd called my mate Tim over on the radio to join in the fun and the excellent footage was shot by him.I've seen dolphins a couple of times before but have never been able to get so close, nor engage them in this way-fantastic stuff. 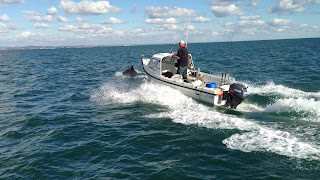 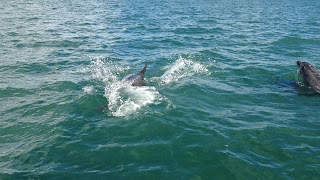 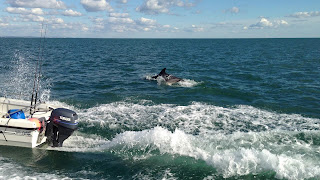