Not fishing related at all, although it's entirely possible that this vehicle may indeed one day be used as  fishing transport, but i thought it would be interesting to keep a record of progress with my latest 'tinkering' project.
My good friend and ex-colleague Paul James has recently emigrated to Canada, seeking his fortune, and a complete change of lifestyle. Parked in his garden for several years, rotting away under a tree, was an old Land Rover which had to be removed before Paul's house is rented, in March. I'd had my eye on it for a while, and as P.J only wanted scrap value for her, I decided to take the plunge and part with the readies. She cost about the same as a reasonable quality reel.
For L-R aficionados ,HMV 260 K is a short wheel base, petrol engined, series 3 station wagon with overdrive, registered in 1971 and therefore qualifying as a historic vehicle and free road tax. She's actually the second vehicle that I've rescued from the back of Paul's house. In 2003 I acquired a 'one off' prototype 2cv based 'jeep' as a non -runner from his neighbour's ditch. The GRP body tub had been laid up by a fibre glass tech at the 'Orkney' factory in Yapton-birth place of my own boat. Despite the cylinders being full of water, as the air cleaner had been left open to the elements, i managed to get it running, secure an MOT and, after having some fun running around in it (on it) for a while, sold it to a local entrepreneur (dodgy character)from Middleton. It is now in production as a kit car in Holland.
I've always admired 'proper' Land Rovers mostly for their rugged simplicity, but also for their heritage which is distinctly British. Although I'm decidedly unpatriotic, I do get some satisfaction from owning a vehicle that was built in the midlands, as opposed to my usual choice of manufacturer from mainland Europe. In fact , this is the first British vehicle I've owned for well over a decade.
There was a time, roughly in fact when HMV was built, when Land Rovers ruled the world, but then the Japanese brought out a vehicle called the Toyota Hi-Lux............and the world changed. If you've ever driven a Hi-Lux and a cart sprung Land Rover, you'll understand why this happened. However, it's an astonishing fact that 70% of all Land Rovers ever built, remain on the road today.
Steve assisted me to drag her from her resting place with his Pajero(another Land Rover crusher) a couple of days ago, tow her home on an 'A' frame, which  proved to be trouble free, and park her up in my back yard, with Jan's approval of course. She doesn't even bat an eyelid-remarkable!
Unfortunately most of the glazing had been vandalised by beings of a lesser intelligence, and the truck had been used by Paul as a rubbish tip, so the first job was to spend a day clearing her out, disposing of the trash using Gavlar's ever dependable trailer and, as she was now parked on a hard surface, get underneath her for a proper assessment.
Being completely objective, the chassis is in reasonable condition needing some minor welding but the bulkhead, will take a bit more effort. I'll be able to get a better idea when the front panels are off but first impressions are that it's savable.......just. Gav's offered to lend me his  welder which will save me buying a new one as my well used , and now totally knackered 25 year old 'Clarke' finally went to the tip with the rest of the junk from the 'landie'.
The rest of the panels are alloy(Birmabright), and apart from the usual dents, that seem to be found on every Land Rover of this vintage, are pretty much O.K.
I decided, when removing the remains of the glass from the hard top, to try and retain the side window feature and shall attempt to track down some identical 'Safari' sliders. There were four folding rear seats fitted, but, as I'm unlikely to need them and they take up valuable room in what is a relatively small payload area, I removed them but may possibly recycle the cushions by using them in the cab.
The real attraction for me of a vehicle like this is that when I open the bonnet, EVERYTHING is recognisable, and I know what it does and how it does it.I cannot say the same for more modern automotive technology. I passed my driving test in 1978 and cut my teeth on repairing leaking Mini brake wheel cylinders, welding cover sills, and tuning lucas points and S.U carbs, so the stuff under the Landie's bonnet an d behind her wheels is somewhat familiar.
The aim of the project will simply be to try to get her running and driving through the gears and four wheel drive before deciding whether an M-O-T is feesable. She last faced the Ministry tester in October 2005.
Today, having cleaned off a considerable accumulation of 'greenery' from her bodywork with the pressure washer, I made an attempt to try and wake her  from her slumber. Everything mechanical is still connected and complete, and although P.J hadn't run her on the road for at least five years, she had been started at some time in the intervening period, though I 'm sure she's been under that tree for a couple of years.

Using one of the auxiliary batteries from the camper for the spark side of things, and because the Landie's fuel tank and lines look a bit cruddy, I nipped up to the boat to borrow its tank of nice clean petrol, which i would simply connect to the carb inlet via some fuel hose to give her the necessary 'go juice'.
I rigged up the battery but before connecting the fuel, turned her over a few times on the starter to loosen things up, prime the cylinder walls to gain a bit of compression, check I had oil and charging lights and the starter motor actually functioned. All was well. Oil in the sump and remarkably, nice blue coloured liquid in the rad, quick touch up of the plugs and points with some emery, and then a check that I had a spark....which I did.
Fuel line connected, pump the bulb, float needle worked as there was resistance and no leaking fuel. Turn the key and held my breath..............She turned over for a while and then suddenly burst into life amazingly firing evenly on all four pots immediately, and subsequently settling down to nice even idle akin to a quiet 'purr' . I ran her up for about twenty minutes and she had good oil pressure, charged effectively and kept her cool with a nice warm top hose indicating excellent circulation. Lights. wipers and even the heater fan are working-what a result!
Time will tell whether or not I keep and run the Land Rover as a second 'knockabout' motor. Being a tax exempt vehicle with ridiculously low' classic car' insurance costs, she has inherent value, even in a non-roadworthy state, and turning a profit on her would make a substantial contribution to the coming year's boat mooring fees. In the meantime, it'll be absorbing to do some spannering again-it's been a while.
For a bit of fun, I managed to you-tube the engine running. It's here http://youtu.be/Eajzj1w23yM 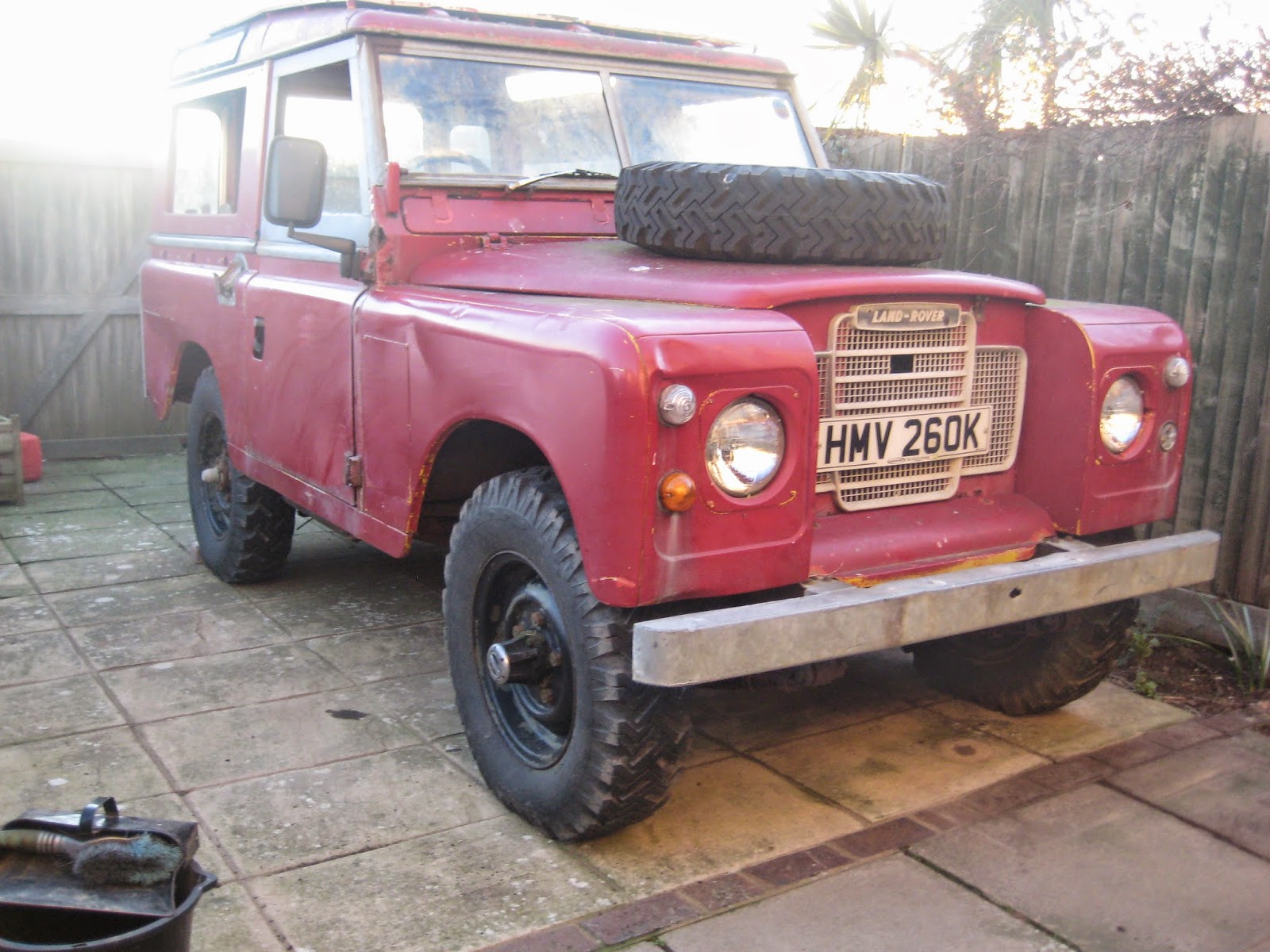 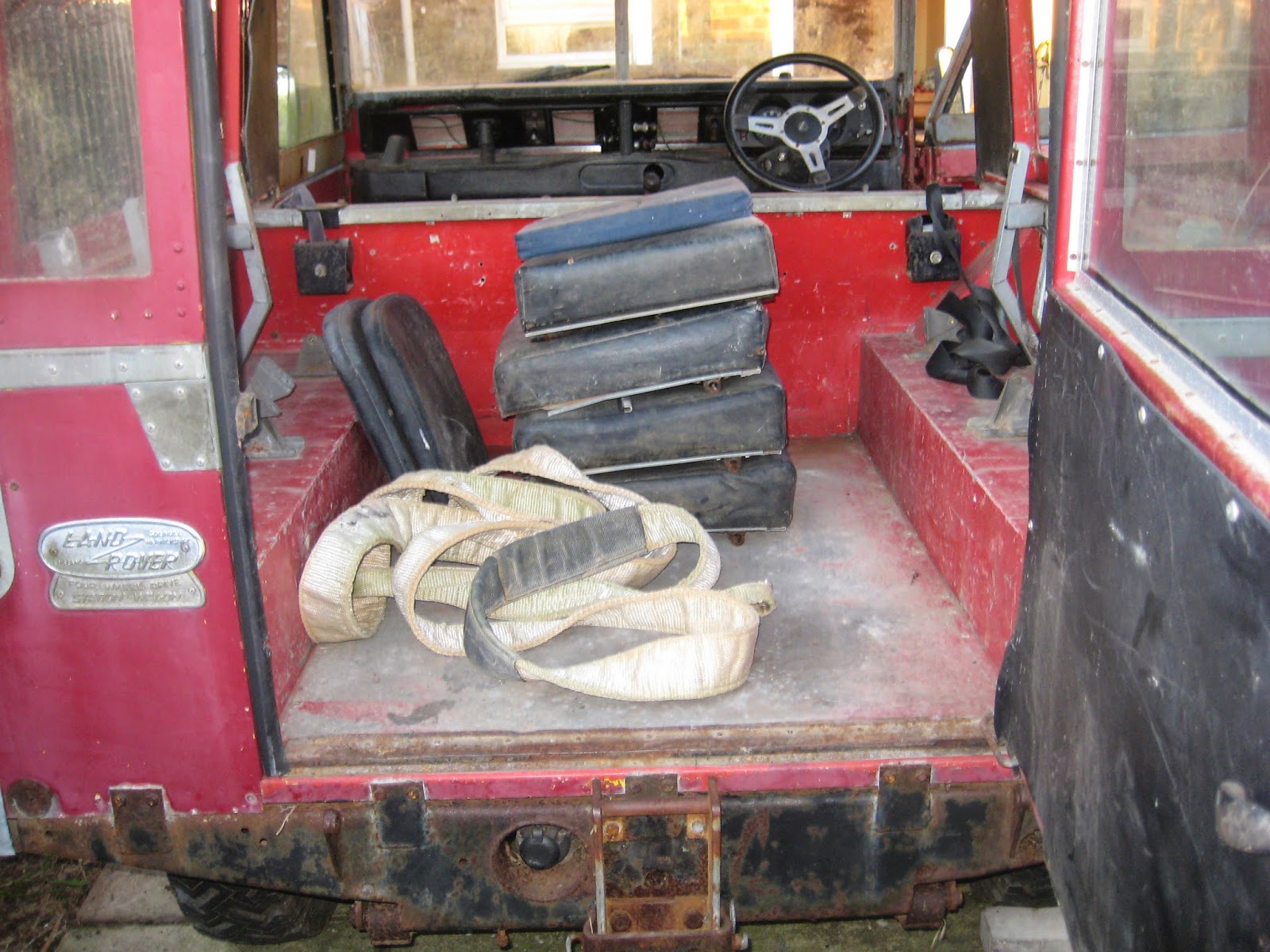