A 22lb Blonde Ray actually...but more of that later! A very interesting trip this one more for information gathered than anything else., Still nursing 'man flu' I'd intended a short session to 'blow away the cobwebs', setting off from the marina at 0930, spending three or four hours fishing the #2 area, and then return before the lock out at 1330.
There were plenty of boats in the general area when I arrived and set up on #29 in quite a bumpy S.E F4 . I couldn't help but notice that the water was surprisingly clear, and did wonder if a bass session on #12 would have been a better bet.
Target was, of course, cod but , listening attentively to the radio, it would appear that they were scarce indeed, however, Dick and Neil were obviously playing with a few 'spikies' somewhere out east, so my reading of the water may have been correct.(Logged for the future)
I did briefly consider running over to #12, but settled instead into a steady stream of dogs, punctuated with two thornbacks and a spotted ray as the tide ebbed nicely. By 1300 all the other boats had disappeared home and Neil called me up to say that he was popping over for the rest of the day, persuading me to stay for the 'lock out' in the process. The wind had dropped considerably by now, making conditions much more comfortable. John on 'Moonlighter' also paid me a quick visit hailing me on the radio whilst I was taking a quick doze under the cuddy. Nice to finally meet in person .
I watched Neil circle around me in the distance, 'searching for some mud' and eventually drop the pick just NE of #6.The slack had given me a quiet spell so I decided on a move to #28 for the remainder of the session.
Neil soon called me to say that one of his crew had dropped a likely cod, and then followed it up minutes later with a successfully boated big double. He knows his stuff this boy.
As the tide flooded a bites began to materialise again and along with the dogs came a welcome bream. Chatting again with Neil on the wireless, I had to cut short our conversation as my whole squid baited heavy outfit was slowly disappearing over the side. After a prolonged battle with several dives and three failed attempts to squeeze the beast into my, on this occasion, totally inadequate landing net, up came this beautiful female blonde ray tipping the scales at 22lb.
The fourth boat fish 'event' of this season for me, and dimensionally the largest fish I've had inside the boat, so far. With her tail extended ,she could possibly just have touched both gunwales, and was actually quite difficult to frame for the shot. Luckily she was cleanly lip hooked, and went back easily gliding like a kite into the depths.
This fish illustrates the fact that in sea fishing, particularly in a boat, you never really know what might turn up. I was indeed elated, and Neil was equally as enthusiastic when i called him up.
Fishing on until dusk, I joined 'Spirit' for the run home in the dark making the mooring at 1800 .
Both Neil and Dick had indeed picked up a few bass out east ,but not in great numbers and it was refreshing to hear Dick mention that he'd upped the size limit for his crew obviously to preserve this valuable asset. I would imagine that numbers will increase soon and I'll be keeping a close eye on windguru. No cod for me again but most of the other boats that I know of faired similarly except for those 'in the know'. I tip my hat to you blokes. 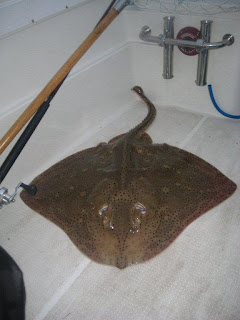 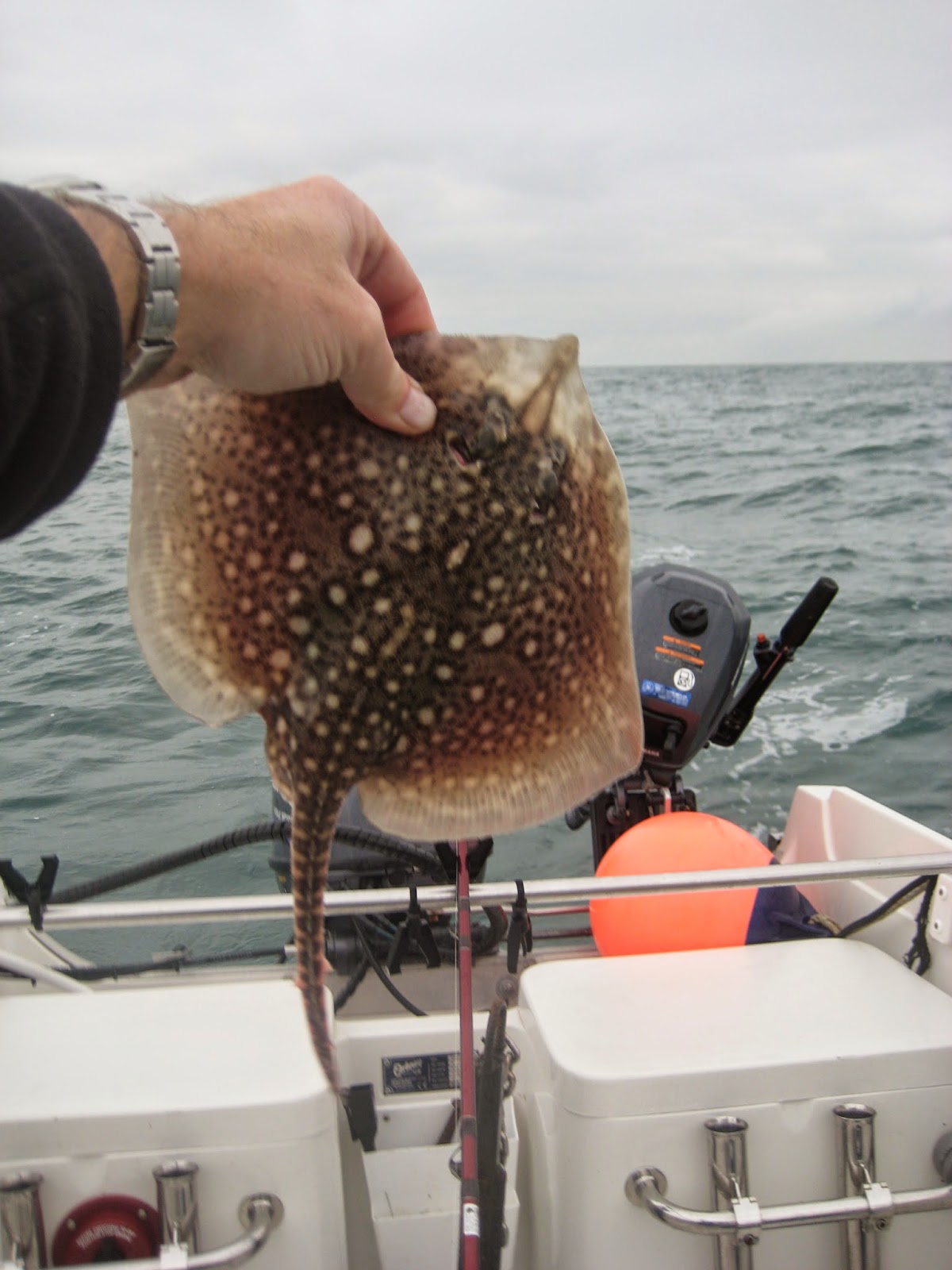 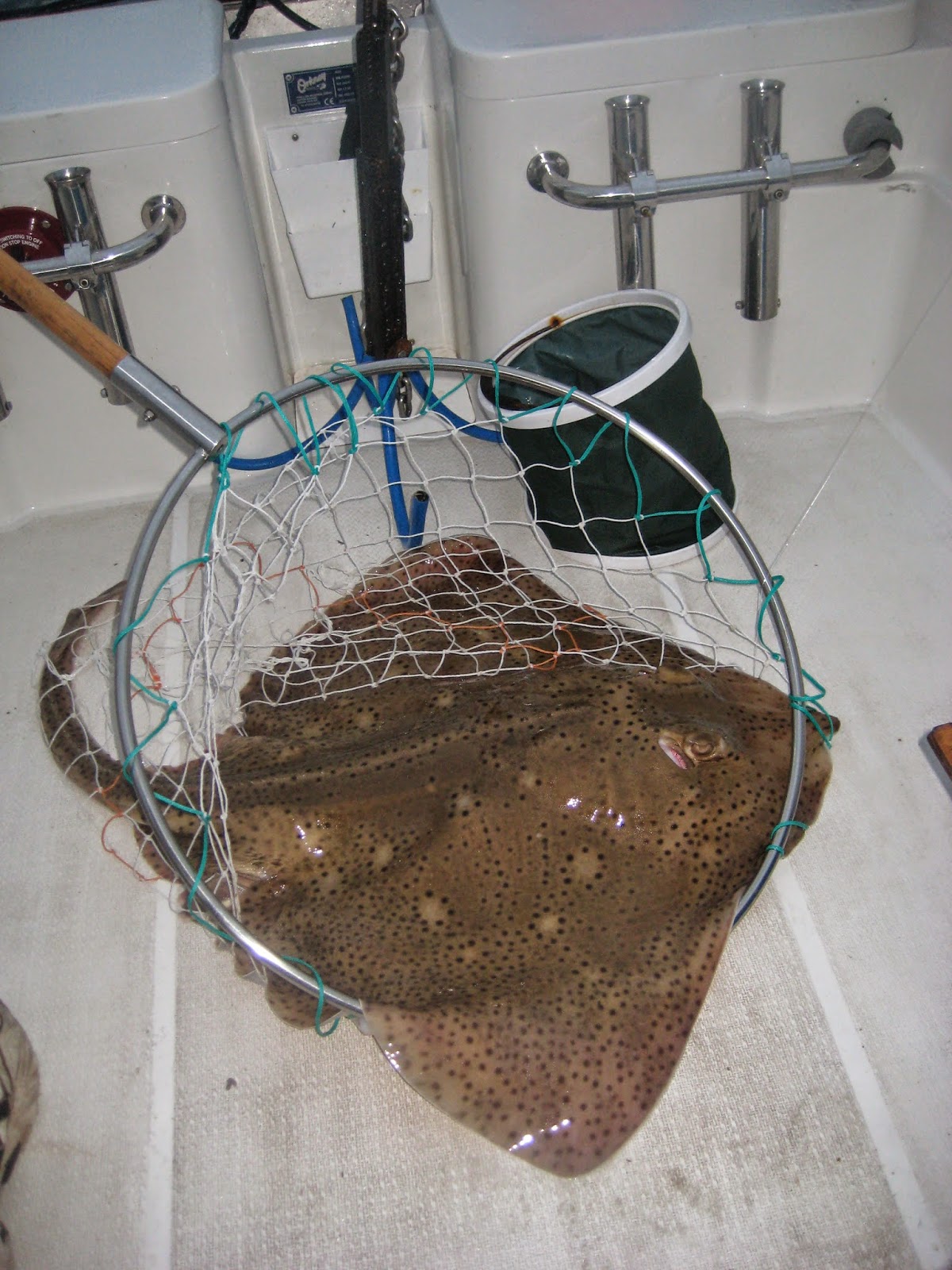