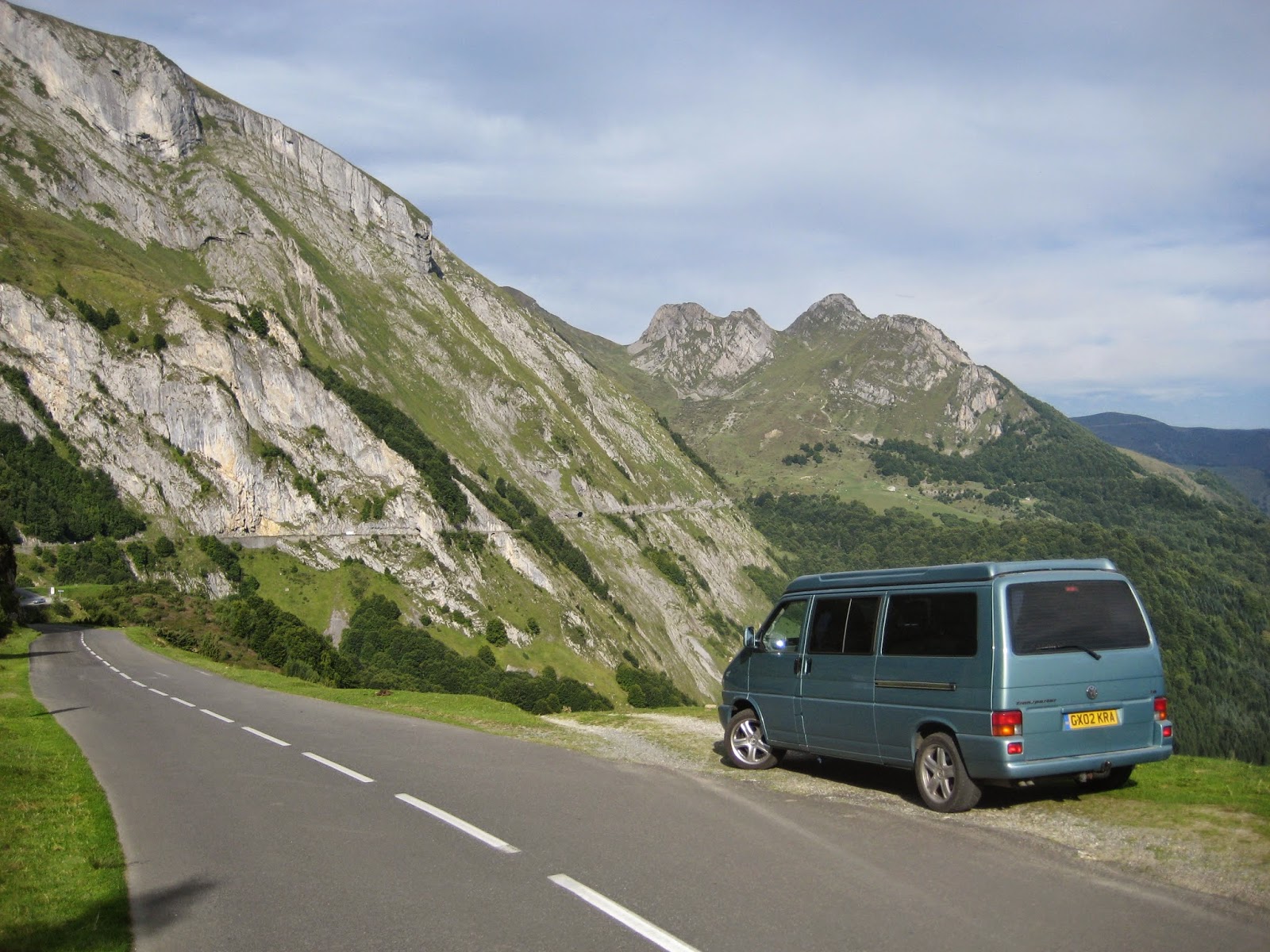 Just spent the last couple of weeks touring France in the camper with my wife , and packing a couple of rods 'just in case'. The first week was spent motoring to, and about the stunning Pyrenees ,climbing the various Cols made famous by the, it has to be said masochistic Tour De France cyclists. If you get the chance, the Col Du Tormalet, and neighbouring Col d'Aubisque are every petrol head's dream whether on two or four wheels. Jan wants to take her push bike next time.
The second week was spent travelling north, and a return visit for a couple of days to Menil-a tiny village on the banks of the beautiful, River Mayenne, where we are able to camp within casting range of the water. 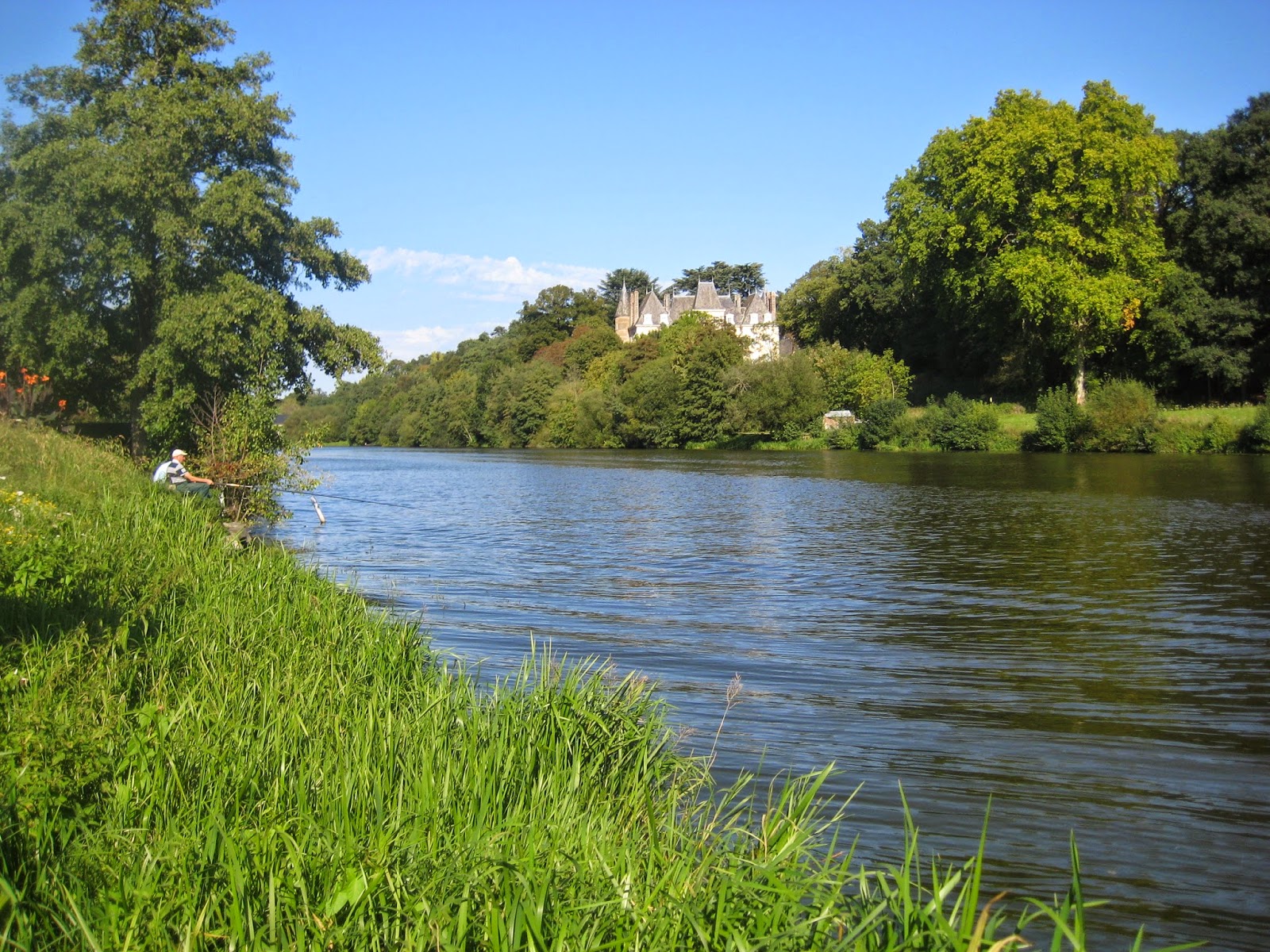 A couple of years ago we spent four days here and quite by chance, I found out that the river had some quite excellent carp fishing. Not the bloated artificially fed still water type, but lean, sleek, fast fish which really know how to put on a show. 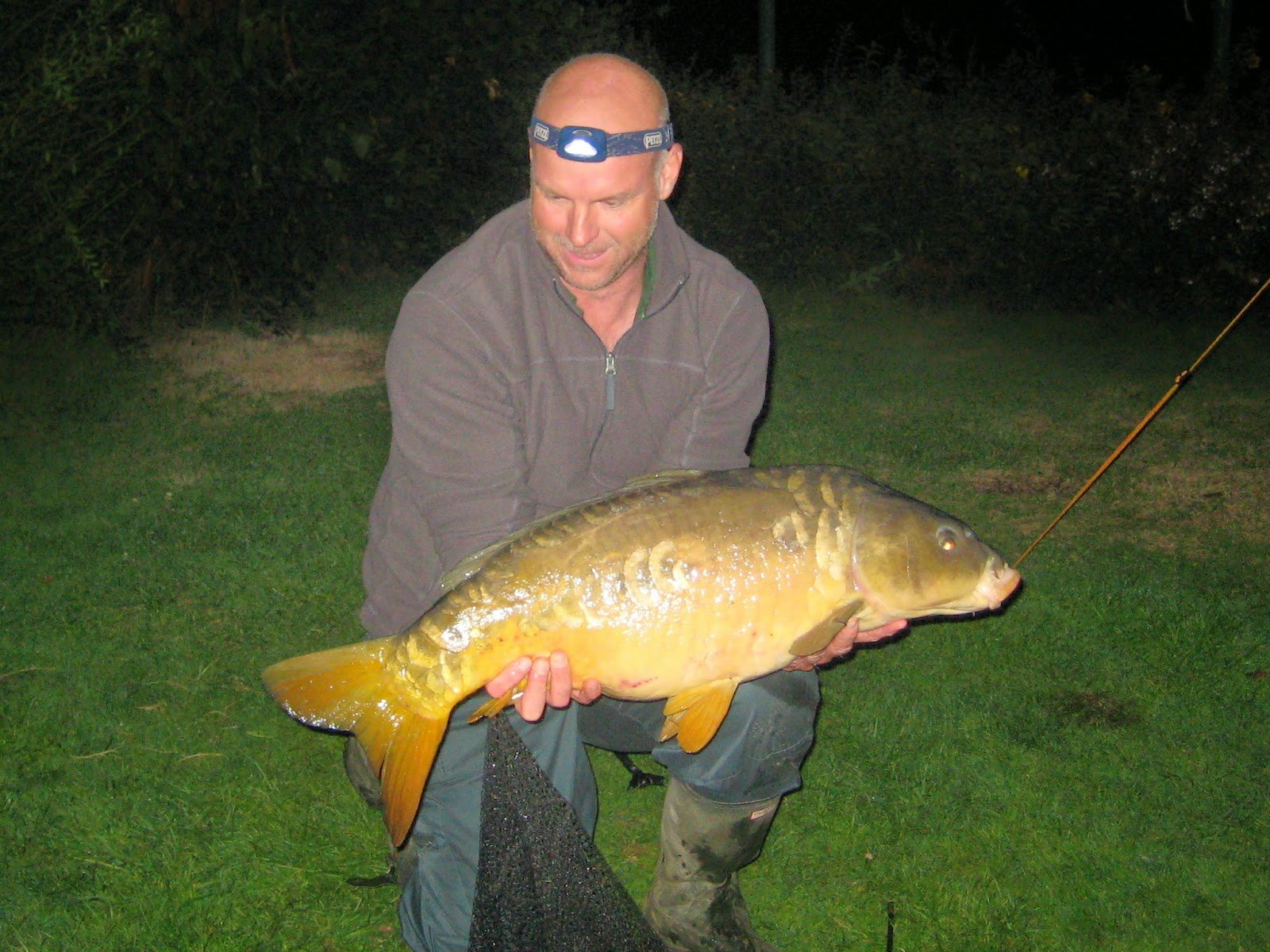 I was lucky enough to Improve my personal best river carp with the rather handsome specimen(pictured above), as well as a handful of lesser nocturnal visitors, but In the two cold, clear nights that I fished this time on this year's trip, I could not repeat the success.
Despite failing with the carp, during the day we coarse fished occasionally, with float and sweet corn, much to the amusement of the locals, and did have some fun with bream, and a lovely roach for Jan.Most of the french anglers we met were either, fishing for tiny roach which were to be used as live bait, 'vif' in the native tongue, or had multiple rods spread out over huge distances intended for either brochet, (pike) or sandre (zander) neither of which seemed to show up very often. When they did, they were consigned to the 'pot' .
Interestingly a neighbouring camper proudly showed us a silure (catfish) of a pound if it was lucky, captured on 'vif' which he was about to cook for his mutt. Apparently, the catfish, which can grow to a couple of meters or more, are not indigenous to this river system, and are held responsible for the decline in the 'toothy' predator fishing, which they prey on.I have an idea that the french's love of all things edible may also be a contributory factor.
On our penultimate night, we stayed at a campsite complete with every amenity you could possibly want, including a fishing lake.'In season' the place would have been pure 'hell' and we would have avoided it like the plague, but at this time of year we virtually had the place  to ourselves. Actually, this sort of location,far more common in England, is a comparative rarity over there, the norm being  sites which are set in quiet,picturesque spots with pristine basic facilities and all for about a tenner a night for two with the Vee-Dub thrown in. Granted, electric hook up is usually a couple of extra Euros......not exactly extortionate! Camping being a big part of french culture , sites can be found in most towns and villages, the government run 'Camping Municipal' often being the best.
A couple of hours float fishing in the evening saw us have some fun with some 'jet propelled' carp which was highly entertaining, if a touch 'artificial' and Jan, once again, took the best specimen with this scale perfect example.
So ended our little excursion across the channel but i had a few more days leave left,and more fishy targets to pursue. 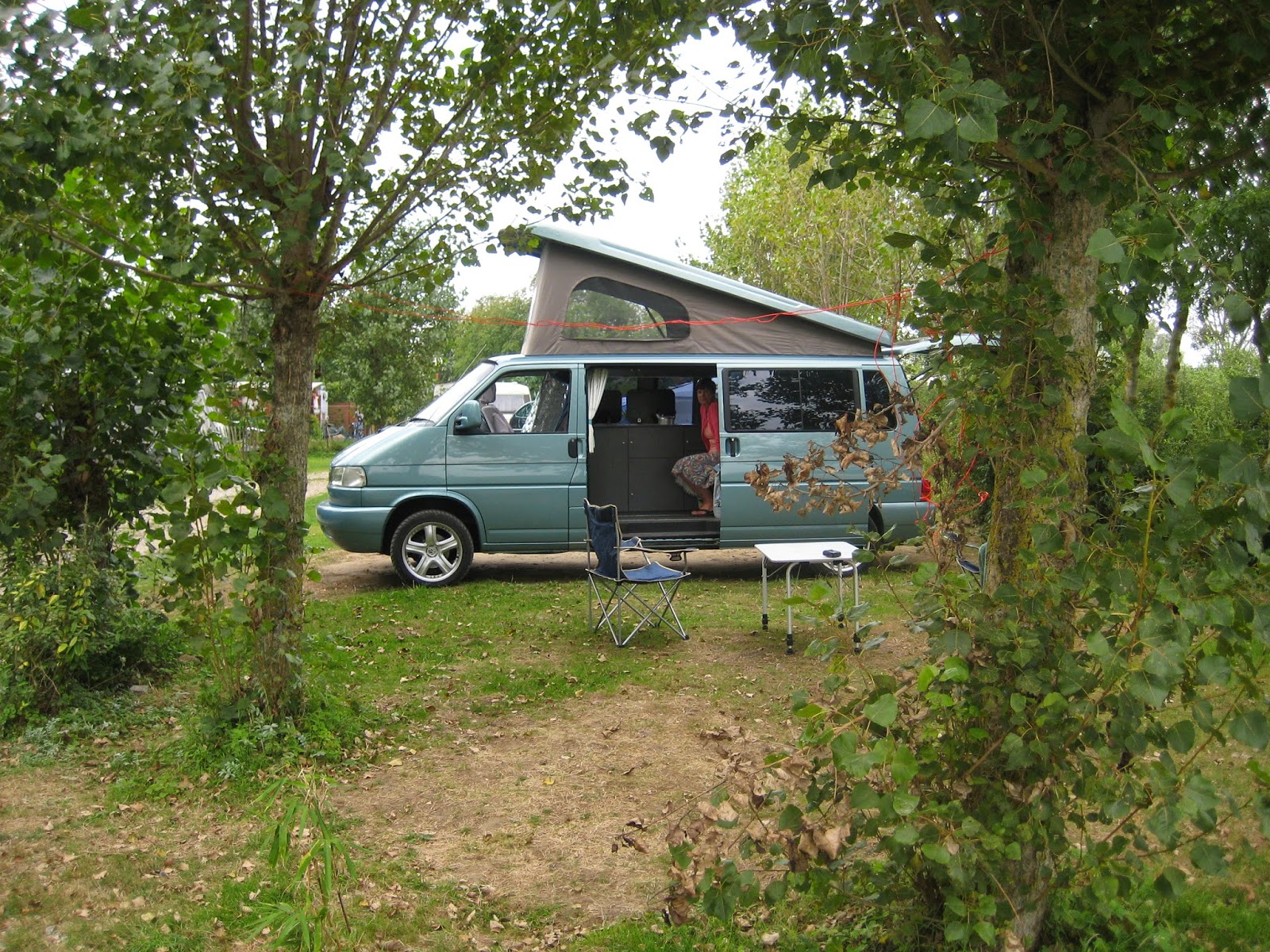 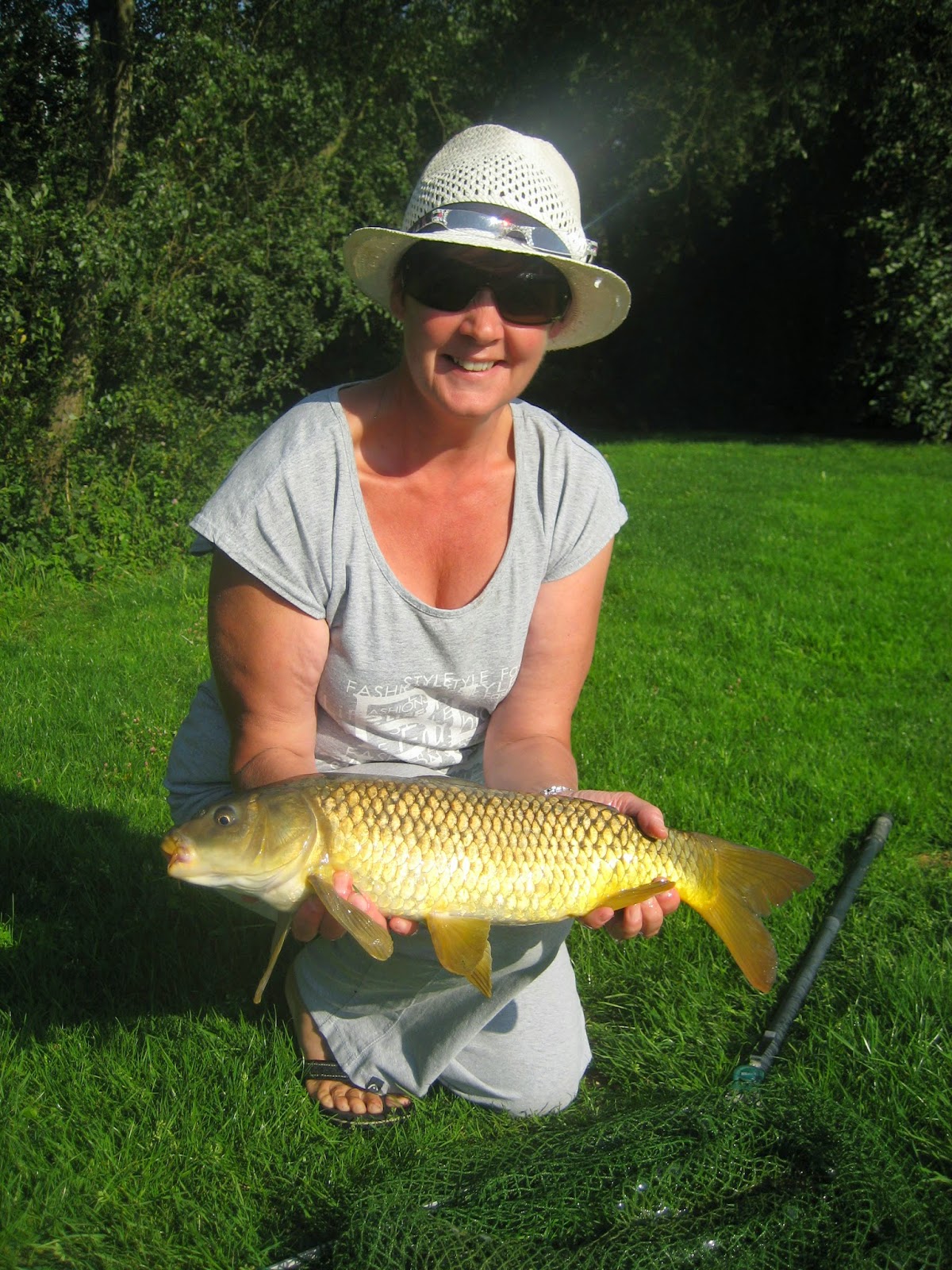