A few days ago Andy and me had a fruitless attempt to catch a bass from, quite nice surf, at the river mouth . To be fair, it's still a little early for this sort of caper.
The surf is no more, and warm calm days have been the nature of recent weather so it was time to get out in the boat and hunt bass.Apart from a couple of winter launches where, to be honest, I was just messing around learning to handle the boat and it's associated kit, this is the first 'proper' sea fishing trip that I've done having now had the tub parked on my drive for over six months. Hopefully, I'll build up my confidence over the summer and be able to extend my  'sea' season well into the winter months this year.
With a high water at 1400, we launched from the slip at about 1030 and headed out to the Kingmere reef, and in particular the 'bass drift' mark.Several boats were present when we arrived Including three rod and line commercials, and 'Spirit of Arun' all fishing artificials , and not an anchor rope in sight.
I was reluctant to get too close to the fleet, so we  decided to sit back and watch and choose our own spot.Heading for a group of 'working ' birds and starting on a 60g Norden pirk converted with a circle hook, I soon had a thump and the first bass to the boat- the tiddler of about a pound in the picture.Three more quickly followed to 3lb, plus a bonus pollack, and Andy's shad also produced a nice fish of around the same size.
As the tide slowed we decided to move to the 'Spur wreck' where we picked up a handful of pollack to three pounds, and a tiny,  but feisty codling all on white 115 redgills.
We finished the day joining up with the commercials,and taking our turn in a very organised and well mannered short drift taking a few more small bass.Moving a short distance away to do our own thing,a huge shoal of larger fish suddenly appeared at the surface and Andy watched one take his white gill right in front of our eyes. A really good fish of between 6-7lb (he actually forgot to weigh it)that gave him an epic scrap on his light spinning rod and new £13 'lidl reel' (bargain)and allowed me the chance to christen my new boat net.By the time we'd dealt with that bass the shoal had completely disappeared.
We called it a day shortly after at about 4-30 having had a terrific sun soaked session and taking a small bass each, from the dozen or so caught, for the pot.Had mine for tea baked with a knob of butter.
I couldn't help failing to notice that, both the commercials, and Spirit's crew, were kitted out with multi gill rigs probably weighted with a pirk, and were sometimes bagging up.It was interesting to see how the boats shadowed Spirit, and that when a shoal was located, how tightly packed both the fish and boats were.In the end we took advantage of this ourselves.
I enjoyed the drifting Immensely, and the GPS wasn't that difficult to get to grips enabling us to  accurately repeat drifts, even when we were on our own.So, a few more trips out like this wouldn't go amiss.
HW 1411  5.5m 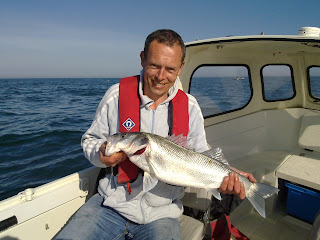 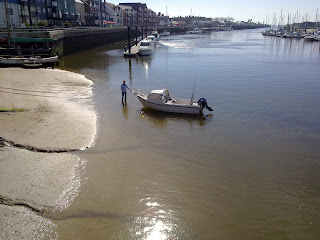