The surf conditions have been very favourable of late and P.P's been getting quite a few decent bass out culminating in a superb 77cm P.B specimen in the early hours of this morning.With the time and effort he puts in to his fishing, he really does deserve a fish of this calibre, and I personally am chuffed to bits for the man.Andy, when you read this-big well done mate!
What I'm also very excited about,as results this season have confirmed, is the fact that bass of this stamp can be caught from our local venues, given the appropriate conditions, and although it's fun to travel 'out east' to try for bass, it's not strictly necessary.
Having been unable to join in on the fest over the past few days, I finally hooked up with Andy today for a low tide session just east of the river mouth for a couple of hours.The southerly was blowing quite hard (F5-6), whipping up a nice surf, and the temperature, despite the wind chill factor, was still reasonably high for the time of year.
Whole squid on a 6/0 -4/0 pennel were my tactics wading probably 100 plus yards out into the sea and chucking out a further 30yds into the strong headwind.
I love this sort of fishing for it's sheer simplicity.Just a light rod and reel (AFAW 11ft estuary rod and a 6501), chest waders and a small shoulder bag with bait, scales and a few bits of spare end gear is all you need to carry. Anything else just becomes a hindrance.
Our first casts were into what looked like a slight depression adjacent to a sandbank and after about ten minutes i had the first bite- a solid unmissable thump, which even Andy noticed,was easily struck home and a very strong battle ensued.So unusually fierce was the fight that we both thought that it would turn out to be a very big fish,but instead a modest sized bass came in through the waves and although fairly hooked in the mouth by the pennel hook, the bottom hook had snagged a gill plate which may account for the tussle.
After walking her in to 'dry' land for the 'weights and measures' (4-08- 58cm) and trophy shot ,she went back in none the worse for her ordeal, and we made our way out again for Andy to get his turn.
It didn't take long, a couple of casts later and this time a more subtle bite ended in my mate beaching a 50cm fish to balance the session out nicely.
We had a few more casts as the big tide progressed up the beach, but the light was fading fast , and we were both a bit 'winded' by the 'wild' weather, so we called a halt to yet another success for the 'team'.
When the conditions are right, we could be in with a chance of a few more fish like this before the end of the year.Only time will tell. 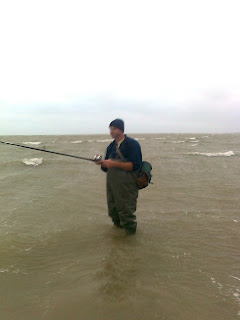 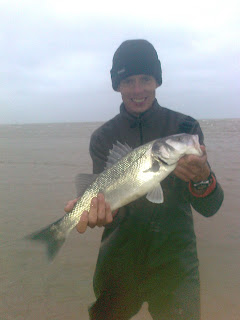 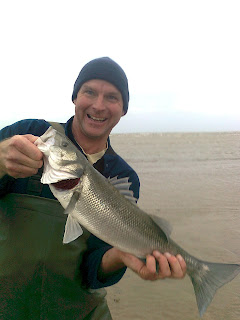